Airbus has delivered its first A330-800s, both aircraft being handed over to Middle Eastern operator Kuwait Airways.

Kuwait Airways had ordered eight of the twinjets, powered by Rolls-Royce Trent 7000 engines, in late 2018 as part of a deal which involved trimming its A350-900 order.

At the time it had been the variant’s only customer. Airbus has since secured overall orders for 14.

Kuwait Airways chairman Ali Mohammad Al-Dukhan says the introduction of the A330-800 “strengthens [our] position as a prominent airline in both the regional and global aviation sector”.

“Arrival of the A330neos commences a new phase in the services we provide to our passengers on board, in addition to efficient and comfortable air transport,” he adds. 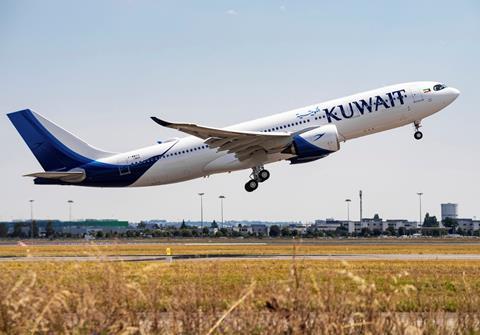 Kuwait Airways has configured the twinjets with 235 seats in two classes, including 32 lie-flat beds in the business cabin.

While Airbus has trimmed A330 production to just two aircraft per month, chief executive Guillaume Faury is upbeat about the aircraft’s post-crisis prospects.

Speaking during a briefing on 29 October, he said the production rate was “small but sustainable”, pointing out that the A330 programme also benefits from military tanker deliveries.

“A330s are an important piece of the puzzle,” he says, pointing out that airlines are under pressure to retire older aircraft with efficient, competitive models. “I think it has the potential to be a very good aircraft for moving out of the pandemic.”