ANA to return A380 ‘Flying Honu’ to Hawaii route

All Nippon Airways (ANA) will return its three Airbus A380s to service on the Tokyo Narita-Honolulu route on 1 July, making it the third Asia-Pacific carrier to reactivate the double decker type. 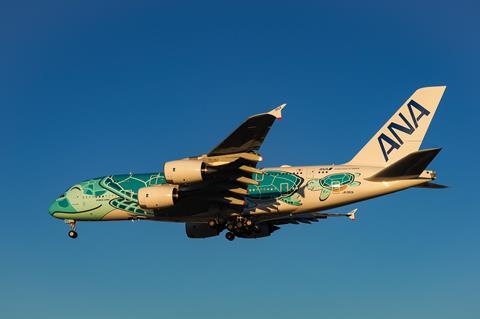 The move sees ANA become the third Asia-Pacific carrier to re-start normal A380 operations as the region emerges from the coronavirus pandemic. Qantas and Singapore Airlines have already returned the type to service as restrictions on international travel have eased.

The aircraft originally entered service with ANA in May 2019. The three aircraft feature distinct liveries designed to reflect the natural beauty of Hawaii.

ANA, noting growing demand for international travel, will boost frequencies on its international schedule from 1 June to 30 June. It will operate 1,464 flights across 37 routes during the month, up from 1,385 flights in May.

In addition, ANA will resume its Haneda-London service in June.

“With the recent easing of travel restrictions in Japan and other countries, there has been an increase in demand, mainly on North America and Asia routes,” says ANA.

“While flights from/to select European cities have been suspended since March, we have now adjusted our operations and will resume the Haneda-London route starting June.”

ANA adds that the Haneda-London flights will be operated by the Northern Polar route, similar to its Narita-Brussels and Haneda-Frankfurt services. It says this will reduce flight time by 60-90 minutes compared with the central Asia route.

The central Asian route, however, may be used based “on weather conditions and other factors.”

As for the return London-Haneda service, it will use the central Asian route.