East Russian carrier Aurora has signed an agreement on delivery terms for eight Irkut SSJ-New twinjets at an economic forum in Vladivostok.

The aircraft, a revised version of the Superjet 100, are part of a fleet modernisation for the carrier which includes Ilyushin Il-114-300 turboprops and the UZGA LMS-901 utility aircraft.

State leasing firm GTLK says it intends to supply Aurora with the aircraft by 2026, and that the agreement with the airline – and Irkut – at the Eastern Economic Forum covers the “main terms” for SSJ-New delivery.

Speaking at the event, GTLK chief Evgeny Ditrikh said the company planned to conclude all leasing contracts for aircraft provision by the end of this year.

Irkut says the first four aircraft will be handed to Aurora in 2024 and the other four in 2025. General director Andrei Boginsky says the SSJ-New will be the first domestic aircraft in the carrier’s fleet. Aurora has been using types including the Airbus A320 family and De Havilland Canada Dash 8. 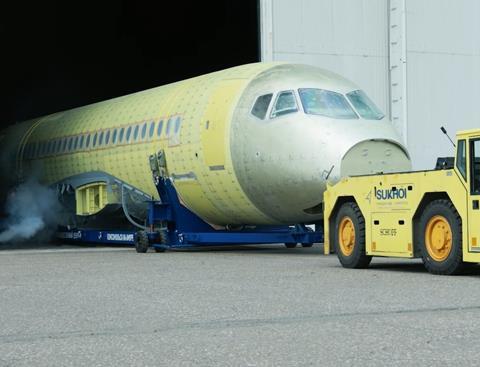 Fuselage roll-out of the SSJ-New, a version of the Superjet 100 with more domestic components

Ditrikh says the lessor is supplying aircraft including Superjet 100s and L-410s, as well as helicopters, to eastern operators including Yakutia and Polar Airlines, with a value exceeding Rb17 billion ($278 million).

Aurora is central to a dedicated consolidated airline for the eastern region of Russia, and last year signed an agreement with GTLK to acquire eight Superjet 100s to support the carrier’s fleet.

Ditrikh says the recovering air traffic volumes and the refocusing of Russian passenger flows to domestic destinations – including those in the eastern areas – means the new operator has “particular importance”.

Stability of the new airline’s financial model and solvency will depend on state support measures, adds GTLK, including allocation of subsidies for maintenance and the development of an aftersales network.

Ditrikh says GTLK envisions supplying 20 helicopters to the carrier, as part of an investment project under which the lessor will purchase over 100 helicopters during 2023-25.