As airlines encounter ever-stronger climate headwinds, demand for sustainable aviation fuel (SAF) is sky high and climbing. So too is demand for the non-fossil ‘feedstocks,’ or ingredients, from which it is made.

There has been a surge in SAF sales this year, with forward-thinking carriers announcing long-term commitments for millions, even billions, of litres to help cut their carbon emissions and comply with evolving blending mandates. 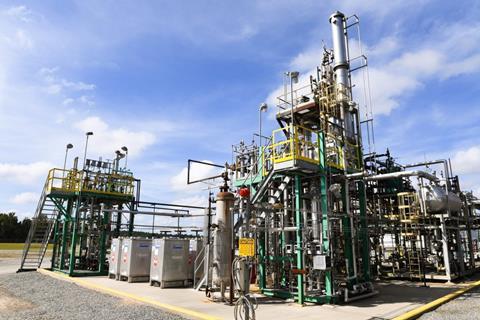 Producers, existing and new, are also stepping up. For example Neste, the biggest SAF supplier, is increasing its global output up to 15-fold from next year. It is also strategically acquiring feedstock providers.

For now, SAF’s most common sources are recycled fats, oils and greases (FOGs). They are expected to remain so until around 2030. But that will not be sufficient to satisfy skyrocketing demand, which increasingly will be supported by new feedstocks, processing technologies and producers.

There is also Power-to-Liquid (PtL), through which CO2 emissions collected from industry or sucked from the air are converted to carbon feedstock, then synthesised with green hydrogen to create SAF.

And through the Alcohol-to-Jet (AtJ) pathway, the sugars in feedstock such as sugarcane, corn grain, and switchgrass are fermented to ethanol or other alcohols, then transformed into clean fuel.

The US Government’s SAF Grand Challenge Roadmap forecasts 600-fold growth in domestic demand by 2030, and another tenfold-plus by 2050. “It is crucial that demonstration projects prove technologies and supply chains in this decade if this level of industry buildout is to occur in the following two decades,” it warns.

The caveat is that feedstock production must not compete with food crops or degrade land, forests or biodiversity, that it doesn’t create new emissions which diminish SAF’s benefits, and that its production credentials are authenticated.

Three years before its first deliveries, New York-based DG Fuels has sold 825 million gallons of SAF, to be created through a new process the company says will consume 97% of carbon extracted from timber waste feedstock instead of permanently storing excess CO2, and produce three-to-four times more SAF from the same volume of feedstock as competing products. Its first customers are Delta, Air France-KLM, and an unnamed industrial buyer.

Breakthrough Energy, founded by Bill Gates, recently granted $50 million to Lanza Jet, which next year plans to launch the first AtJ SAF plant. Customers include IAG which is also a Lanza Jet shareholder, and one of a growing number of airlines or aviation companies investing in SAF providers or aspirants.

Air New Zealand, like many carriers located far from current SAF production, wants a local industry in addition to imported supplies to help ensure energy security and affordability. It also wants government policies which prioritise the production and sale of feedstock for SAF over competing biofuels.

Others are sowing their own futures.

Within the Wheatbelt Region, a Belgium-sized chunk of Western Australia, Qantas, with industrial partners, and consulting with local stakeholders, plans to grow its own native biomass crops for conversion into low-carbon fuels. A feedstock feasibility study will start next year.

But it’s all food for thought in a market hungry to decarbonise.