Belarusian operator Belavia has receive its first Embraer 195-E2, one of three to be leased to the Minsk-based flag-carrier.

Belavia is already an operator of the conventional 195 and 175 regional jets manufactured by the Brazilian airframer.

It is leasing three of the re-engined E2s from AerCap. The aircraft is fitted with Pratt & Whitney PW1900G powerplants.

“We like to keep our fleet young and fresh,” says Belavia chief Anatoly Gusarov. “With the addition of the E195-E2 we can take more passengers, further, in greater comfort, and more efficiently. The E2 is the perfect fit.” 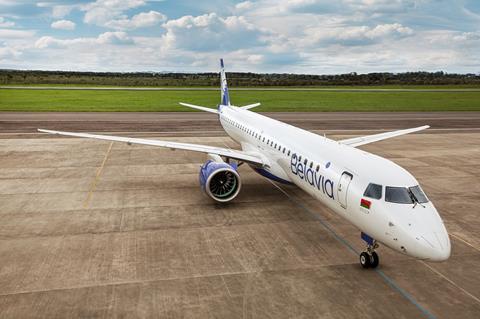 Belavia is taking three of the re-engined E2 version

Embraer says the airline took delivery of its first on 21 December. It features a 125-seat configuration in two classes, including nine seats in the business cabin.

Belavia plans to deploy the aircraft on routes such as London, Barcelona, Nur-Sultan, Munich, Paris, Sochi, and Amsterdam.