Brazilian operator Azul has received its first Airbus A350, after the twinjet was ferried to the city of Belo Horizonte.

The -900 aircraft, temporarily operating with the French registration F-WTAO, departed from a facility in Tarbes where it had undergone maintenance checks.

It has been configured with 334 seats, according to the carrier.

According to Azul chief John Rodgerson, the A350 will provide “much more comfort” to customers and “more efficiency” compared with the A330s it uses on long-haul services.

The airline is aiming to introduce two A350s by the end of the year, each replacing an A330.

Azul’s first aircraft, MSN168, was originally delivered to Hong Kong Airlines in late 2017. Leased from AerCap, it is powered, like all A350s, by Rolls-Royce Trent XWB engines. 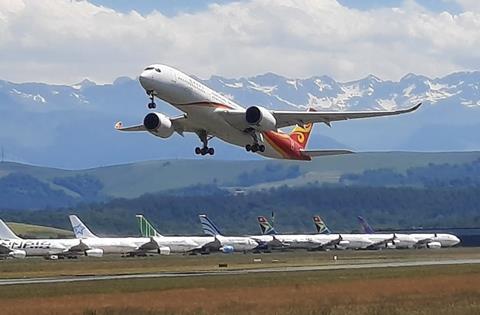