Cargojet is to take a pair of the converted twinjets, and will hold options on another pair – as well as options for two conversions of the larger 777-300ER.

The first aircraft to be delivered to Cargojet will be a modified 777-200LR with serial number 29742, originally delivered to Delta Air Lines in 2009.

Mammoth says the twinjet, fitted with General Electric GE90 engines, will enter the conversion process in mid-2022 and be delivered in the second half of 2023.

The company unveiled its conversion programme for the two 777 models in September, noting it had acquired access to a feedstock of Delta 777-200LRs. 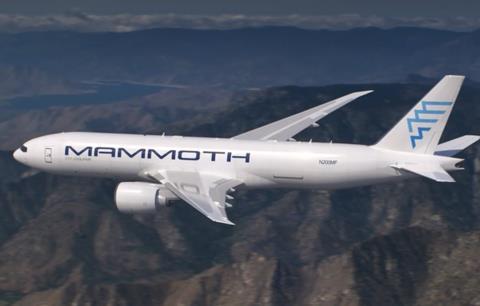 Mammoth’s freighter conversions will carry the -200LRMF and -300ERMF designations.

“This is the next generation of converted freighters that have improved on-wing performance while using less fuel and emitting less carbon than the current ageing widebody fleet.”

It had stated earlier this year that it intended to acquire 777 freighters but, at the time, had not signalled whether they would be new-build or converted aircraft.

Cargojet said it would use the 777s on long-haul Asian routes, integrating them with the airline’s domestic network.