Czech Airlines’ order for seven Airbus jets, including four A220-300s and three A321XLRs, have been removed from the airframer’s backlog.

Airbus’s latest backlog information, covering the period to 31 July, shows that the seven jets listed against the airline have been cancelled.

Czech Airlines filed for insolvency earlier this year and Airbus, as a creditor, had lodged a claim worth more than $800 million against the airline over payments for the A220s and A321neos.

The carrier had ordered the aircraft in 2019 after converting a previous agreement for seven A320neos. 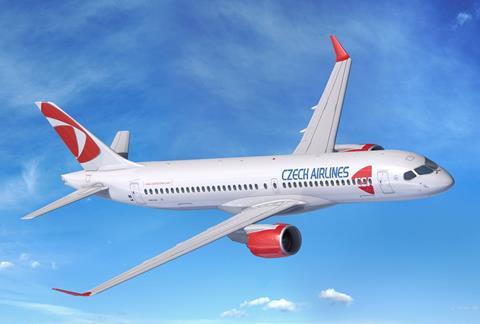 Airbus experienced a quiet July in terms of new orders, with only a single agreement for two A320neos from Mexican operator Volaris.

As a result of the slow activity and Czech Airlines cancellation, net orders for the year so far slipped from 38 to 33 aircraft.

It delivered 47 aircraft over the month – including two A350s, to Air France and China Eastern Airlines, plus 45 single-aisle jets – taking total deliveries to 344.