UK budget carrier EasyJet is expecting to fly up to 20% of its pre-crisis capacity over the third quarter, up from 14% during the first half, and foresees these levels to start increasing from late May onwards.

The airline provided the latest outlook as it projected first-half headline pre-tax losses, to the end of March 2021, would be “slightly better” than forecast at around £690-730 million ($950 million-1 billion).

“Our capacity forecasting has been accurate and disciplined throughout the pandemic, which has allowed for strong cost control,” the airline says.

“Our focus on cash-generative flying over the winter season has minimised cash burn, with cash burn in the second quarter [of £470 million] better than guidance.”

EasyJet says customers are booking closer to departure times and visibility for the second half “remains limited”. It is not giving estimates for full-year 2020-21 performance. 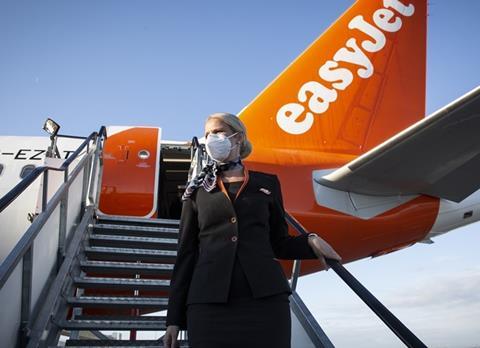 At its peak over the first six months the airline operated 161 aircraft, just under half the figure for the same period to March 2020.

“We will continue to operate a reduced schedule throughout much of [the third quarter] but are ready to ramp up our operations to match the level of demand we see in the market,” says the airline. It says it remains “well-positioned” for recovery this summer.

EasyJet says it had unrestricted access to about £2.9 billion of liquidity at the end of March 2021, having raised over £5.5 billion since the beginning of the pandemic.

It says it has repaid the first £300 million tranche of borrowings from the government’s corporate fund set up to support businesses during the crisis, with the remaining £300 million due for repayment in November.

EasyJet carried out sale-and-leaseback transactions on 35 aircraft during the first half, raising £842 million in gross proceeds. It retains ownership of 56% of its fleet, with 41% unencumbered.