Edelweiss to expand A340 fleet as long-haul demand picks up

Swiss leisure carrier Edelweiss Air is to introduce an additional Airbus A340 to its long-haul fleet from next year.

Edelweiss will source the aircraft from its sister operator Swiss.

“The additional Airbus A340 will enable us to meet the increasing demand for flights to our long-haul holiday destinations,” says Edelweiss chief Bernd Bauer.

It has identified the jet as a 2003 airframe, MSN546, which operates within the Swiss fleet as HB-JMC.

“Planning work is currently underway for the upcoming modifications to the aircraft’s cabin,” says the leisure airline. 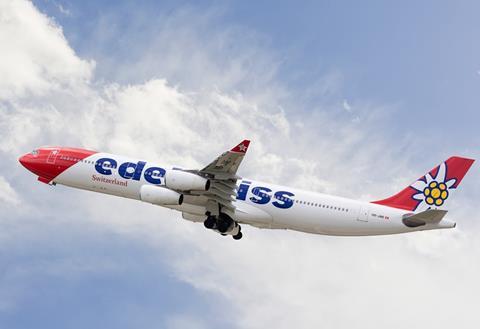 Edelweiss expanded its short-haul fleet this summer with the inclusion of another pair of Airbus A320s.

Edelweiss recorded strong demand at the beginning of the summer season, with passenger numbers in July exceeding pre-pandemic levels.

It transported 304,000 passengers during the month – a record single-month figure for the carrier – while achieving an 84% load factor.