Emirates recorded an impairment of Dhs500 million ($136 million) in its full-year 2020-21 figures specifically relating to certain aircraft which it does not expect to return to service before they reach end-of-life or their leases expire.

Another four A380s were removed from service because they are grounded and “not expected to be used” before their scheduled retirement within the next year, says Emirates.

Outside of the specific aircraft write-off, parent company Emirates Group did not recognise any impairment with respect to the airline cash-generating unit.

It based its assessment of the recoverable amount of the airline unit, compared with its carrying value, on current and anticipated market conditions to 2024-25 – although the company acknowledges these projections are “inherently uncertain”.

But it says it is assuming gradual recovery of airline operations to 90% of pre-crisis revenues by the 2023-24 fiscal year. 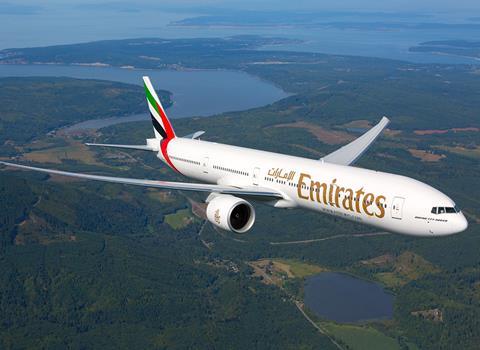 Emirates has options on 61 additional 777Xs.

“The airline is firmly committed to its long-standing strategy of operating a modern and efficient fleet,” it says, adding that newer aircraft are “better for the environment, better for operations, and better for customers”.

Parent Emirates Group’s overall costs for 2020-21 reduced by nearly 44% to Dhs51.2 billion. While depreciation, amortisation and impairment charges across the company rose only marginally, to Dhs19.7 billion, they became the largest component of total costs for the year.

Dnata turned in its first-ever full-year loss of Dhs1.8 billion including these impairment charges.