Middle Eastern carrier Emirates is to recycle a large proportion of parts from its first Airbus A380 following the aircraft’s retirement, just 13 years after delivery.

The aircraft (A6-EDA) was delivered to the carrier in July 2008, during a ceremony attended by FlightGlobal.

It flew its last commercial service from Singapore to Dubai in March 2020, just as the pandemic began to cripple global air transport.

Serviceable components from the aircraft – including its Engine Alliance GP7200 powerplants, landing-gear and flight-control systems – have been retained.

But the aircraft was subsequently deregistered and has been handed to Falcon Aircraft Recycling, with which Emirates has signed a contract to re-use much of the jet’s structures and components.

Emirates says the bar and other cabin features will be converted into “bespoke furniture” as well as “aviation memorabilia” and retail items to be sold in a few months’ time – with part of the proceeds benefiting the carrier’s associated charity Emirates Airline Foundation. 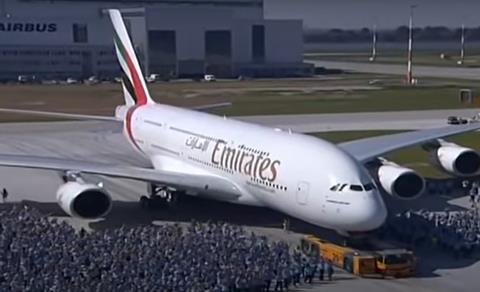 The airline says the agreement with Falcon is intended to “dramatically” reduce the environmental impact of aircraft scrappage and cut landfill waste. All the material recovery will take place in the United Arab Emirates.

“Increasingly, retired aircraft are flown to remote locations and left to languish after being stripped for parts,” says the carrier.

“Traditional salvage and recycling projects focus on recovering only profitable components, thereby leaving behind a substantial portion of the aircraft and materials that go into landfill or sit idle indefinitely for years.”

Falcon Aircraft Recycling director Andrew Tonks says the A380 programme is the company’s “most ambitious project”, involving the first A380 disassembly outside of Europe.

Tonks says about 190t of material – including metal, plastic and carbonfibre – will be removed for repurposing and recycling.

He says the recovery initiative will ensure that a “majority” of the aircraft’s structure will have a “second life”, adding: “Our teams are currently busy with the breakdown and final concepts for the first batch of unique upcycled items.”

The carrier’s first A380 carried out 6,319 flights over its lifetime. Emirates became the primary A380 customer and is preparing to receive the final A380s to be produced, following the decision to end manufacture of the type.

Emirates Airline president Tim Clark says: “Through this initiative, our customers and fans can take home a piece of aviation history while saving valuable materials from landfill and contributing to a charitable cause.

“It’s an elegant and fitting retirement solution for this iconic aircraft and our flagship.”