Etihad partially restoring A380 fleet for service on London route

Middle Eastern carrier Etihad Airways is to re-introduce Airbus A380s from next year, initially on the London Heathrow route.

Four of the double-deck type will be brought in from summer 2023 to address increasing demand on the Abu Dhabi-based airline’s network.

New Etihad chief executive Antonoaldo Neves says the carrier has “decided the time is right” to return “some” of the A380s to the operational fleet.

Etihad took delivery of 10 A380s but former chief Tony Douglas said last year that the type was “no longer commercially sustainable” as the pandemic sapped passenger traffic, and withdrew them from service.

The airline aimed instead to centre its operation on the Airbus A350-1000 and Boeing 787.

But Neves says the post-pandemic recovery and rising demand has made the A380 “financially viable once more”. 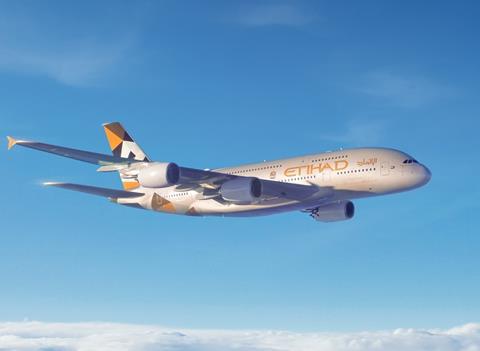 “We look forward to welcoming our guests again on board this remarkable aircraft,” he adds. The carrier is undertaking preparations including training of pilots, cabin crew and technical personnel.

The A380s are fitted with nine first-class, 70 business-class and 405 economy-class seats, plus the high-premium ‘Residence’ accommodation.

Etihad says the restoration of the A380s to service will free capacity to increase frequency on other routes and enable new destinations to be opened. It says five Airbus A320s will also be added as part of the measure.