First A330 for UK start-up Flypop arrives in Malta

Start-up long-haul carrier Flypop’s first aircraft, an Airbus A330-300, has arrived in Malta having undergone painting in the UK airline’s new livery.

The aircraft, MSN1445, powered by Rolls-Royce Trent 700 engines, was flown from the South Korean capital Seoul to Malta on 23 October.

Flypop says it has been flown to Malta to undertake “cargo duties”.

It has been transferred from the Philippines registry having previously been operating for Cebu Pacific Air as RP-C3342, leased from Avolon.

The aircraft will be locally re-registered in Malta as 9H-POP and operated by the Maltese division of wet-lease carrier Hi Fly, according to Cirium fleets data.

Flypop is also taking a second ex-Cebu Pacific twinjet, MSN1420, which has been similarly painted but has been awaiting new Trent 700 engines, the carrier states. The aircraft has been parked in Guangzhou.

Operating from London Stansted, the airline aims to serve destinations on the Indian subcontinent, including Amritsar, Hyderabad, Goa, Kolkata, Ahmedabad, Kochi and Chandigarh. 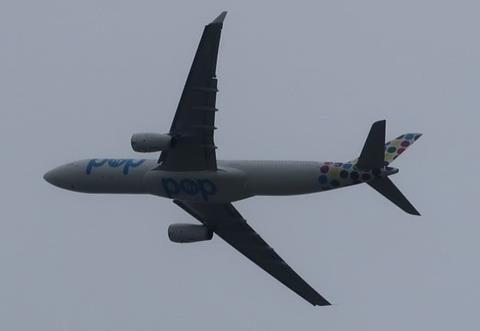