Vanuatu’s government is committing to supporting the Pacific republic’s airline, Air Vanuatu, including continuing lease of its single Boeing 737-800.

Air Vanuatu says the infrastructure ministry has informed the carrier that it will do “all that is financially necessary and commercially viable” for the airline, after suggestions in the local Daily Post publication that the 737 was facing repossession.

The 737-800 (YJ-AV8) is leased from US company Air Lease, and is the only jet in the carrier’s fleet. It is used for services connecting Port Vila to destinations in Australia and New Zealand. 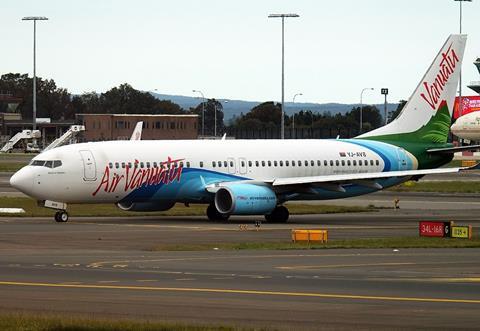 Air Vanuatu has a small fleet which includes this 737-800

The airline says the “top focus” for its management team is securing the aircraft necessary for its operation.

“This includes continuing the lease on the Boeing 737 and, importantly, it also includes additional [aircraft] that are required to stabilise domestic operations,” it states.

“There are agreed payment plans in place for the Boeing 737 and these have been agreed to by the lessor. These financial commitments have been negotiated to ensure operations continue.”