Icelandair has seven of its nine Boeing 737 Max jets in service and expects to bring the other two into operation by late August.

“[Icelandair Group] is currently in the process of financing the three remaining aircraft,” it says, adding that a “backstop” financing option with lessor BOC Aviation is still in place.

While introduction of the Max was held up by the prolonged grounding of the type, Icelandair indicates it is impressed with the aircraft’s performance.

“The aircraft is even more technically reliable and fuel-efficient than originally anticipated with a payload-range exceeding prior expectations – making its suitability for Icelandair’s route network outstanding,” says the carrier in a second-quarter briefing.

“Favourable [post-pandemic] market conditions may result in further additions to the fleet, the feasibility of which is currently being explored.”

Icelandair Group says it will start a strategic initiative to review the carrier’s long-term fleet strategy at the end of summer 2021, with a view to completing the work by the end of the year. 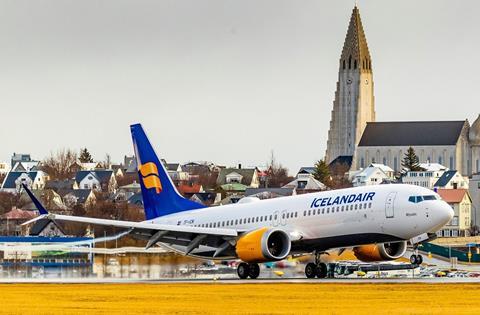 Icelandair has 12 737 Max jets on order, nine of which have been delivered

Icelandair had originally ordered 16 Max jets but cut the order to 12 last year as the air transport crisis took hold and the airline reached a settlement with Boeing over the grounding.

The airline says the “first signs of a turnaround” in international passenger travel emerged over the second quarter, although the increase in production has started later than forecast.

May and June generated a “meaningful increase” in the flight schedule, it says, with destinations and frequency being added weekly.

Capacity for the quarter equated to 15% of that in the same period in 2019. But the airline says it expects to “accelerate its ramp-up” in the third quarter, with capacity in the fourth quarter 2021 to reach 70-80% of the company’s 2019 level.

“The ramp-up has started,” insists chief executive Bogi Nils Bogason, pointing out that strong bookings in the second quarter resulted in a positive cash-flow from operations of $65 million, and nearly $20 million for the first half.

“This is a remarkable turnaround from the previous year.”

But Icelandair Group’s financial performance continues to illustrate the pressure under which the industry has been struggling.

Its operating loss for the quarter reached $62 million and more than $108 million over the first half to 30 June.

But the company stresses that the operating results for the quarter have been affected by its international route network ramp-up.

“Realising a positive profit contribution from flights during ramp-up is generally challenging and this year it was further impacted by the pandemic,” it says.

It points out that it invested “substantially” in operations in preparation for an “ambitious” second-half schedule, expenditure which included acquiring the three additional Max jets and the re-introduction of other aircraft to its fleet which had been in long-term storage.