Kazakhstan’s government is proposing to increase competition in the air transport sector by selling shares in airlines which are part of the Samruk-Kazyna sovereign fund.

The country’s Agency for the Protection and Development of Competition points out that airlines with state participation – including Air Astana, its budget operation FlyArystan and Qazaq Air – account for 80% of domestic air transportation.

It is putting forward a proposal to separate FlyArystan and establish it as a separate legal entity, followed by the sale of 51% of its shares.

The agency is also looking to sell shares in Qazaq Air. 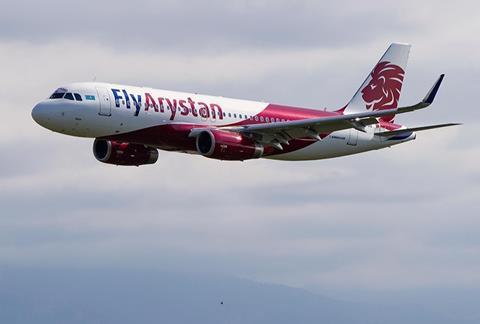 Under the competition agency’s proposal, FlyArystan would become a separate entity

The agency says the share sale proposal is intended to “create an independent player” in the low-cost sector and “increase competition between airlines”.

It states that operator SCAT carries on much of the remaining share of domestic air transport, while three other airlines – Southern Sky, Zhezkazgan Air and Zhetysu – have less than 1% of the market.

The airline measures set out are part of a broader framework to “demonopolise” sectors including oil, gas, electricity and rail, the agency says.

It adds that changes to the ‘open skies’ regime, including granting of fifth- and seventh-freedom rights, would also attract new international airlines.