DAE adds that the SLB for the 18 aircraft took place during the third quarter, with the delivery of the 18 remaining aircraft expected “in the coming months.” 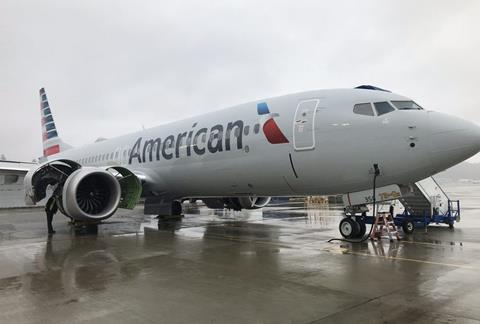 An image posted by DAE suggests the aircraft’s registration is N323SG (MSN 44474). Cirium fleets data shows that N323SG completed production in June 2019, whereupon it was placed in storage amid the global 737 Max grounding that followed two fatal crashes of the type.

“We are delighted to be in a position to offer a meaningful solution to American Airlines, a long-term customer of DAE, and to see the Boeing 737 MAX return to service,” says DAE chief executive Firoz Tarapore.

“We are also pleased to further invest in these technologically advanced and fuel-efficient aircraft types in line with our commitment to environmental sustainability.”

American’s web site indicates that it will resume passenger services with the 737 Max on 29 December, with two flights daily between Miami and New York City La Guardia through 4 January 2021. Over January, more 737 Max departures from Miami will be phased in.

The American delivery follows the 8 December delivery of a 737 Max to United airlines, 21 months after regulators globally grounded the type.