Nordic Aviation Capital (NAC) could have delivered its strongest-ever results in fiscal year (FY) 2019/2020, based on first-half performance, had it not been for the Covid-19 pandemic.

“The company was on track to deliver its 24th consecutive year of increased profitability; however, as Covid-19 began to surface in early 2020, what unfolded was the gravest crisis the industry has ever known,” says the lessor’s chairman and founder Martin Møller in a 20 August statement. 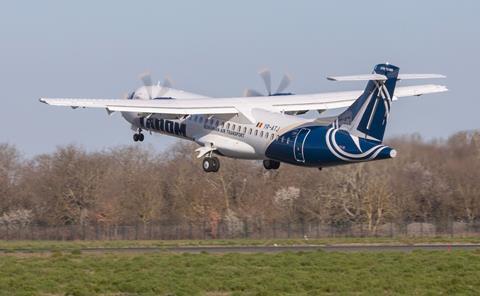 In February, Romanian flag carrier Tarom started taking delivery of a batch of ATR 72-600s it is receiving under a lease agreement with Nordic Aviation Capital.

“The world entered a crisis of epic proportions, posing a threat to every human being and business. The results clearly reflect the significant impact of this unprecedented crisis.”

The lessor reports a $639 million loss in the 12 months ended 30 June and $686 million in earnings before interest, taxes, depreciation and amortisation (EBITDA).

During the period, lease revenue increased by 2% to $760 million. At period end, it had $8.1 billion in total assets and total debt was $5.7 billion.

As at 30 June, many of NAC’s customers had entered into short-term rental deferral agreements and/or were in arrears on payment obligations, it says. As a result, trade receivables and, consequently, expected credit losses have increased.

“Despite this, the cash collection rate on revenue during the financial year was 77%,” it adds.

Although it experienced Covid-19-related payment shortfalls from customers, the lessor recorded a 22% increase in aircraft placements and lease extensions compared with FY 2019. This included the execution of 65 lease extensions with existing customers. The lessor did not provide a breakdown of which extensions and placements happened before and after the global Covid-19 outbreak.

NAC says it took “several processes” to mitigate the negative effects of Covid-19 on its business.

These included its shareholders collectively injecting $60 million of new equity into the business.

In addition, through an approved scheme of arrangement, it reached an agreement with lenders to standstill on and defer debt obligations for a period of six to 12 months, to “ensure stability as the aviation market gradually recovers”.