Polish flag-carrier LOT is to introduce another six Boeing 737 Max 8s, more than doubling its fleet of the re-engined type.

All six aircraft are being source on long-term operating lease from US company Air Lease.

LOT is to take delivery of all the twinjets in October, the airline states. One of them will be taken directly from the Boeing facility in Seattle.

The carrier is undertaking a fleet modernisation programme but, while it evaluates options for regional and single-aisle replacement, it is sourcing aircraft as a “bridging solution”, says LOT chief operating officer Maciej Wilk.

Its decision follows the suspension of operations by Romanian carrier Blue Air, whose fleet included 737 Max 8s from Air Lease. 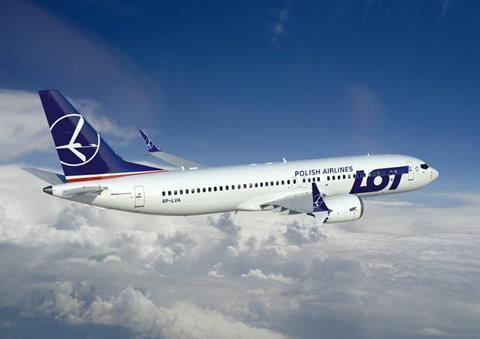 LOT is introducing the aircraft under an agreement with Air Lease

LOT will bring in the first of the additional Max 8s in mid-October to serve European routes from Warsaw.

It already has five Max 8s from Air Lease – as well as a Boeing 787 – and the expansion will take LOT’s Max fleet to 11.

LOT has also been increasing the size of its Embraer regional jet fleet, while it weighs various options – including the Airbus A220 and Embraer E2 family – for a broader fleet renewal.