Egyptian carrier Nesma Airlines is looking to expand its fleet next year, having consolidated its operation under a single air operator’s certificate.

The airline was operating with Egyptian and Saudi Arabian licences but has been brought under Egyptian investment, chief executive Karim Baky told FlightGlobal at the Arab Air Carriers Organization conference in Abu Dhabi.

Baky, who joined the carrier from local operator FlyEgypt, says the new ownership means the carrier is “clean” with “no debt”.

He says Nesma had been using a single wet-leased Airbus A320 but recently replaced it with two dry-leased A320s.

It is aiming to expand its operation next year with another pair of A320s.

Cairo-based Nesma flies to five destinations in Saudi Arabia, as well as Kuwait, and operates Red Sea charters from Europe.

Baky says the carrier, a relatively new member of AACO, wants to use its expanded fleet to open routes to the United Arab Emirates as well as more European charter services. 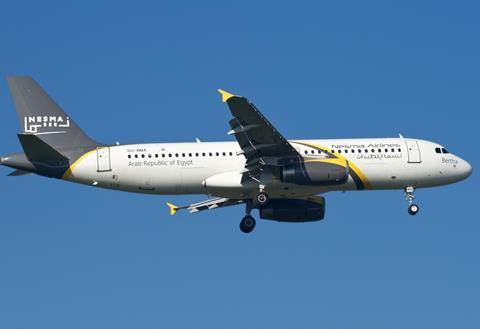 Nesma operates A320s and is aiming to acquire more