The airline states that the operation – which will be daily – will commence on 26 March.

Norse Atlantic uses a fleet of Boeing 787s for its services. The airline’s route network already includes connections to JFK from Oslo, London and Berlin. 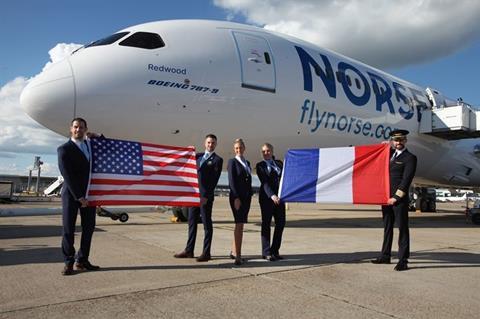 Norse Atlantic will compete against several carriers on the city pair

Chief executive Bjorn Tore Larsen says the point-to-point service between France and the USA will benefit tourism and business.

“Not only are we directly investing in the countries that we operate, by employing local staff, but also supporting job creation across the wider tourism and service industry,” he adds.

Norse Atlantic has configured its aircraft with a two-class cabin.

The carrier also operates transatlantic flights to Fort Lauderdale, as well as seasonal services to Los Angeles and Orlando.

It has been operating for less than six months, having begun flights with the Oslo-New York route in mid-June.