Scandinavian budget carrier Norwegian is to lease 18 Boeing 737s, including several Max variants, from AerCap to build its fleet over the next two summer seasons.

The agreement covers eight 737-800s which will be part of a 70-aircraft fleet operated by the carrier for summer this year.

“Addition of these aircraft will help us achieving our target of building a larger, modern and more fuel-efficient fleet,” says Norwegian chief Geir Karlsen.

The carrier currently has 51 aircraft and has previously disclosed other leases to bring its fleet to 70 ahead of the summer.

“For some of the aircraft under these agreements, Norwegian has the option to substitute certain aircraft with equivalent narrowbody models from Airbus,” it states.

AerCap has confirmed the lease agreement, adding that the extra aircraft will help Norwegian maintain its commitment to operate a “highly-competitive” fleet. 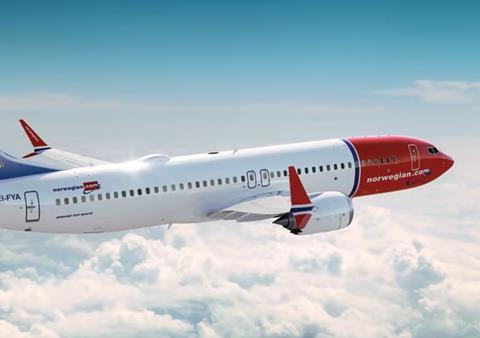