Qantas Group is optimistic that it will be able to keep ramping up capacity as Australia’s domestic travel market reboots, but indicates that an international recovery will take longer.

The group notes that the Omicron variant of coronavirus is likely to continue having a negative impact, cutting group EBIT (earnings before interest and taxes) by A$650 million ($467 million) in the second half of its 2022 financial year to 30 June. 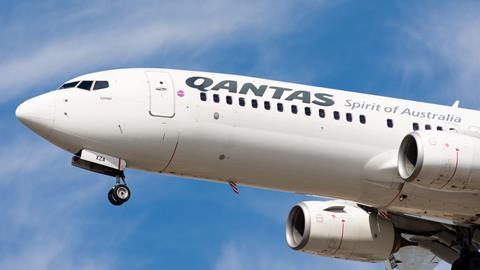 Qantas made the forecast as part of its 2022 financial results. The group suffered an underlying loss before taxes of A$1.3 billion for the six months ended 31 December 2021.

The recovery of group international capacity will lag well behind this. It expects to operate just 22% of pre-pandemic capacity in the third quarter, and just 44% in the fourth quarter.

“We’ve also seen a sharp uptick in international ticket sales in the past few weeks. Predictions in a pandemic are naturally fraught, so we always forecast according to the best information we have but with the agility to adjust as needed.” 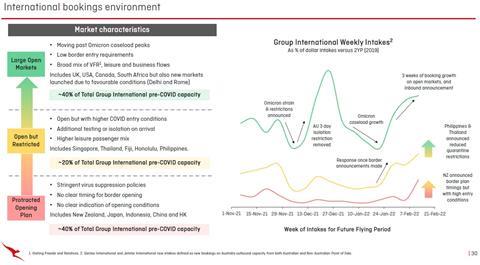 Large open markets such as the United Kingdom, USA, and Canada comprised some 40% of international capacity before the pandemic. Open but restricted markets, such as Singapore, Thailand, and the Philippines comprised 20%.

Countries in the protracted opening plan category comprised 40%, and are likely to see delayed openings. Countries that fit this profile include China, Indonesia, Japan, and New Zealand.

As for the group’s fleet, Qantas, QantasLink, Jetstar, and its freighter operation had 309 aircraft as of 31 December, down from 311 on 30 June. The two aircraft discrepancy comes from the permanent retirement of two Airbus A380s in August 2021, taking Qanta’s fleet of the double-decker type to 10 examples.