French island territory Reunion’s operator Air Austral has become the latest Airbus A220 operator with the delivery of its first of the type.

The A220-300 twinjet (F-OLAV), powered by Pratt & Whitney PW1500G engines, is one of three to be introduced by the Indian Ocean carrier.

Air Austral has configured the aircraft with a two-class layout featuring 132 seats including 12 in the business-class cabin.

The aircraft has been delivered from Airbus’s Montreal Mirabel assembly line, with the other two twinjets for the airline scheduled to follow “in the coming days”, says the airframer.

Air Austral will operate the A220s from Reunion on routes to destinations in South Africa, Madagascar, India, Mauritius, Mayotte and the Seychelles. 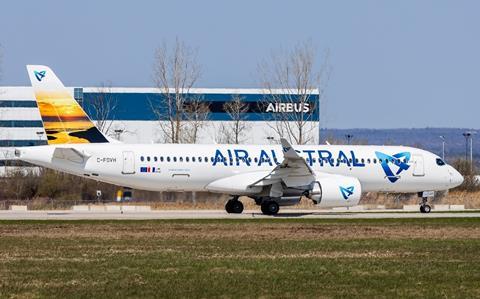 Air Austral has ordered three of the -300 variant