Australia’s Regional Express (Rex) has taken delivery of its first of six Boeing 737-800 aircraft, as it mulls taking up to 10 examples by the end of 2021.

The aircraft, stripped of its previous livery save for a ring of red round the engine nacelles, arrived in Sydney on 5 November, where it will be used for training activities. On 5 December, the aircraft will operate a proving flight for the Australian civil aviation authorities. 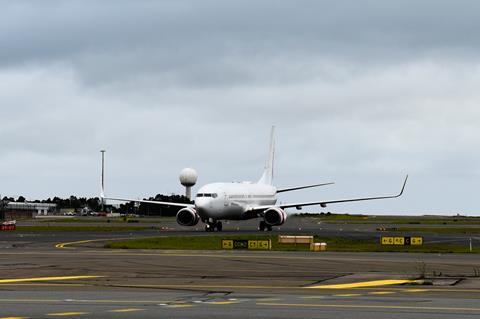 Following that, it expects to introduce the type on flights between Melbourne and Sydney on 1 March next year, with Sydney-Brisbane expected to follow.

Rex deputy chairman John Sharp says if services prove successful, Rex “will inject up to 10 aircraft aircraft into the domestic market by the end of 2021”.

Adds Sharp: “From there, we intend to develop a full domestic airline network, linking all the capital cities over time.”

Rex remained tightlipped about how the 737s will look, only stating that it would debut its 737 livery by the end of the month.

In September, Rex signed letters of intent with two lessors to lease the six narrowbodies. The carrier has not publicly disclosed where the jets come from, though reports indicate that Rex will take former Virgin Australia 737s.

Before the coronavirus pandemic, Rex operated 60 Saab 340s on 1,500 weekly flights to 59 destinations within Australia.