Romanian operator Blue Air has started taking delivery of Boeing 737 Max jets, with the first of a batch introduced from US lessor Air Lease.

The agreement included options which would have potential taken the total number of aircraft acquired to 20.

But Air Lease says the initial Max 8 (YR-MXA) newly transferred to Blue Air is one of 10 destined for the carrier.

The remaining nine aircraft, powered by CFM International Leap-1B engines, will be delivered from April this year and through 2022. 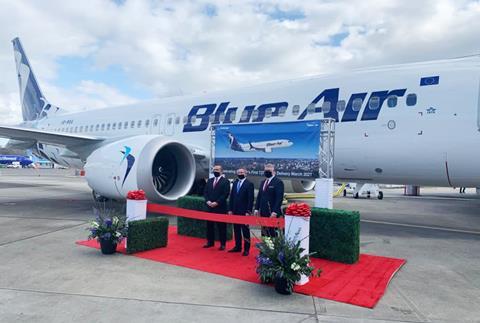 “As we increasingly acknowledge the responsibility of the airline industry for a greener future, Blue Air joins the airline community as an active player in delivering the lowest carbon emissions known to date by a narrowbody passenger aircraft,” says Blue Air majority shareholder Cristian Rada.

“Accelerated replacement of our ‘Classic’ fleet is ensured by the long-lasting strategic partnership with Air Lease as Blue Air’s main lessor.”

Rada adds that the Max deliveries will underpin the carrier’s “resilience” and “secure” its position as the “main Romanian player” in passenger air transport.