Rossiya sets up pilot corps to prepare for Superjet 100 operations

Russian carrier Rossiya has established a new flight unit which will second pilots from parent Aeroflot Group to operate Sukhoi Superjet 100s on its network.

Rossiya uses a mix of Boeing 747s and 777s for its long-haul services, as well as Boeing 737s and Airbus A320-family jets for short-haul operations. But Aeroflot Group is intending the airline to become its focus for Russian-built aircraft operations.

Rossiya states that it is preparing to introduce the Superjet 100 into its fleet as part of this strategy.

Aeroflot Group is planning a fleet modernisation involving large-scale expansion of domestically-produced aircraft capacity. Up to 10 Superjet 100s for Rossiya will be based at Moscow Sheremetyevo by the end of this year.

Rossiya says this transition has required forming a “fourth flight unit”, to which Aeroflot pilots started being transferred in September. Aeroflot already operates Superjets and had 54 in its fleet at the end of June.

Seven initial crews, as well as management personnel, have so far joined the unit. “The number of pilots in the unit will be significantly increased by the end of this year,” says Rossiya.

“These pilots have already passed medical examinations and entrance testing, and are ready to start operating flights.” 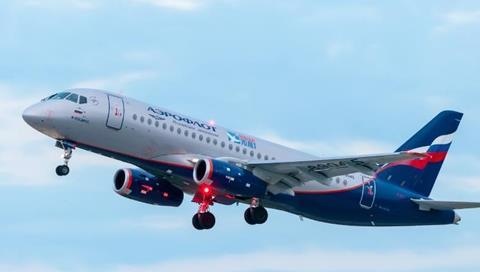 Rossiya parent Aeroflot Group has over 50 Superjets in its fleet

Rossiya is based at St Petersburg’s Pulkovo airport but will serve as a feeder to its parent’s hub.

“Transfer of medium-haul aircraft to Pobeda and Rossiya, and Aeroflot’s focus on long-haul aircraft will allow us to strengthen the airlines’ specialisations, and improve the commonality of the fleet and value proposition,” says the group.

“[Aeroflot Group’s] network will be re-allocated in accordance with airlines’ business models, while increasing co-operation between them.”

It is intending to re-align Rossiya over the next few years, establishing it as a “leading operator” of Russian-built aircraft and a “centre of competence” for domestically-manufactured aviation development.

Aeroflot Group, which also has Irkut MC-21s on order, has signalled that Rossiya will ultimately be responsible for operating all of the group’s Russian-built aircraft.

Rossiya will be tasked with developing intra-regional services that bypass Moscow and St Petersburg, and carrying out Aeroflot Group’s mission to serve socially-significant routes.