RwandAir is to open a non-stop service to Kigali from London Heathrow, having previously served the UK capital via Brussels.

The airline says it will operate the route four-times weekly, up from the current thrice-weekly service.

RwandAir chief executive Yvonne Makolo says the switch to the non-stop rotation – from 6 November – is a result of the “popularity” of the connection.

“The UK is an incredibly important market for us, and we know our customers will value the shorter flight times and increased connections that will be offered by the new service,” she adds.

RwandAir, which has been using Airbus A330s on the route, has flown London-Kigali via Brussels for the last five years. It originally operated from London Gatwick but, after three years, switched to Heathrow in 2020. 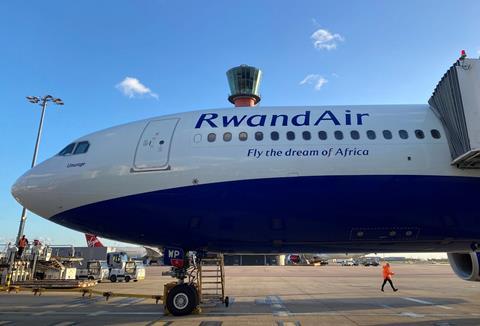