Ryanair retains Lauda A320 leases as renewal options dry up

Ryanair has opted to retain Airbus A320s operated by its Austrian division Lauda Europe, having been unable to reach agreement on a new Boeing 737 deal.

Ryanair says this process is “close to completion” and will secure “material” rent savings and enhance operational efficiency while supporting growth.

It adds that it has been unable to obtain “competitive pricing” from Boeing on a new aircraft order. 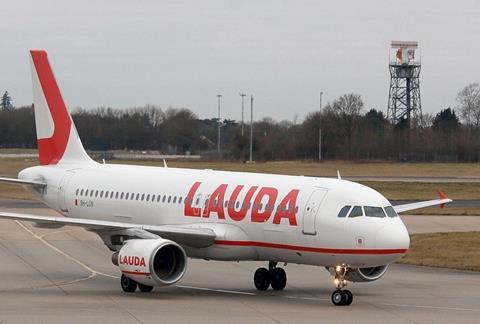 Ryanair has been engaged in a fleet modernisation which includes taking 210 of the high-density 737 Max 8-200.

Boeing is scheduled to deliver over 50 more to the carrier ahead of summer 2023, and O’Leary believes that restructuring undertaken by legacy operators to cope with the pandemic has created “enormous growth opportunities” for deploying the aircraft.

“We continue to recruit and train substantial numbers of pilots, cabin crew and engineers,” says O’Leary, adding that the company will receive the first of eight new CAE full-flight simulators this summer.

Ryanair says the remaining Max 8-200 jets on its backlog will be delivered before the end of March 2025.