Russian carrier S7 Airlines has taken delivery of the first of a pair of Boeing 737-800 converted freighters.

The aircraft are being leased to the airline by GECAS.

The first aircraft (VP-BEN) was transferred to Moscow Domodedovo from a facility in Ostrava on 18 February. It is a 2002 airframe originally delivered to Ryanair, according to Cirium fleets data.

S7 Airlines says its initial flights are scheduled on routes from Moscow to Norilsk and Yakutsk from the end of February.

“With the delivery of the first 737-800BCF a new phase in the development of S7’s cargo transport arm begins,” says S7 Cargo chief Ilya Yaroslavtsev.

“[We] see serious prospects in this sector given the rapid development of e-commerce.” 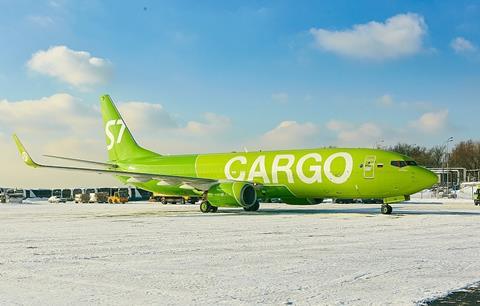 S7 Cargo has previously used the passenger aircraft fleet of S7 Airlines for freight carriage, although – as with several operators – it temporarily reconfigured some passenger jets to carry urgent supplies last year.

Yaroslavtsev says there is a “lack of capacity” in the freight holds of passenger aircraft on certain medium-haul routes where cargo demand is high, and the carrier will deploy the 737-800BCF – which has a payload capability of 21t – on these connections.