Russian carrier S7 Airlines is claiming to be the first in the country to use biofuel, having taken delivery of another Airbus A320neo, which was flown from Toulouse using a blend of sustainable and conventional aviation fuel.

The airline received the aircraft on 22 December. Leased from AerCap, the A320neo takes S7’s total of the re-engined family members to 27.

S7 says the sustainable fuel comprised 10% of the blend, the maximum which could be provided by the Toulouse facility.

But even this modest contribution, it adds, reduced carbon dioxide emissions on the flight to Moscow Domodedovo by 7%.

The airline is a partner in the newly-established Eurasian SAF Alliance, a group of Russian operators which are co-operating with Airbus and Gazprom to support development of sustainable fuel.

S7 aims to be operating services with such fuels within Russia by around 2024. 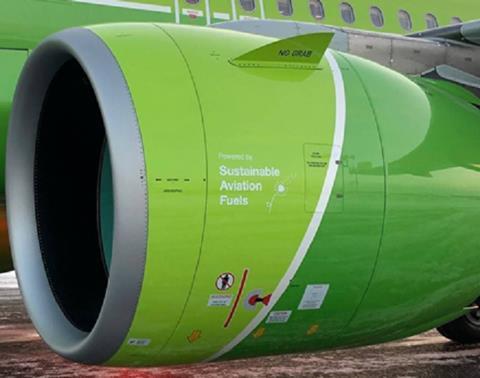 S7 is part of the new Eurasian SAF Alliance

“This is the first ever flight by a Russian airline using biofuel,” says S7 Group chief Tatyana Fileva. “This is an opportunity for us to demonstrate that such flights are real, and that they are the future of sustainable air travel.

“It is vital to develop a legal framework that will allow sustainable fuel to be certified in Russia and used on regular flights. We are ready to take an active part in this process.”

S7 says its environmental strategy includes reducing fuel consumption per passenger by 4-5% by the end of 2022, and the average fleet age to around 8.5 years.