Saudi Arabian flag-carrier Saudia has signed an SR11.2 billion ($3 billion) financing agreement which will partly cover the acquisition of 73 aircraft.

Saudia says the 30 A320neos are those being allocated to its budget subsidiary Flyadeal, and adds that five of the 787-10s have already been delivered.

The airline says the agreement covers its aircraft financing needs to mid-2024. 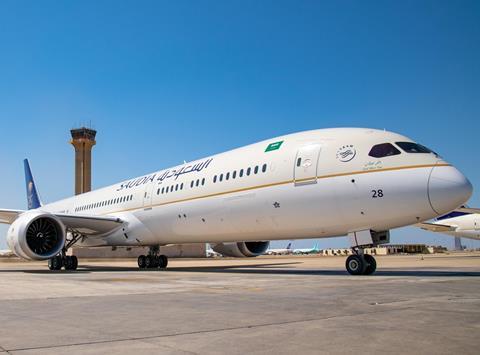 Saudia has been modernising its fleet with types including the 787

The company points out that bids for the financing exceeded SR18 billion, stating that this “shows the market’s confidence” in its long-term strategy.

“The global economy will ultimately recover, and we want to ensure that we are fully-prepared and well-positioned early on to meet the demands,” says Al Jasser.

Saudia director-general Ibrahim bin Abdulrahman Al-Omar adds that the agreement “demonstrates our resilience” as well as the carrier’s “determination” to obtain competitive funding for fleet expansion.