Tajikistan’s Somon Air has introduced one of a pair of Boeing 737-800s which the carrier has agreed to lease from US-based Aviation Capital Group.

The agreement will increase the airline’s fleet to six jets, comprising four 737-800s and two -900s.

Somon Air says the first aircraft under the lease deal arrived on 30 August and it expects to receive the second in early September.

The airline’s deputy general director, Abdulkosim Valiev, says the modernisation coincides with the anniversary of Tajikistan’s independence from the Soviet Union in September 1991.

“Delivery of these aircraft will help the airline develop its route network and increase the number of frequencies and destinations for the convenience of our passengers,” he adds.

Somon Air operates primarily from Dushanbe and Khujand to cities in Europe – including destinations in Russia – as well as the Middle East, and Central Asia. 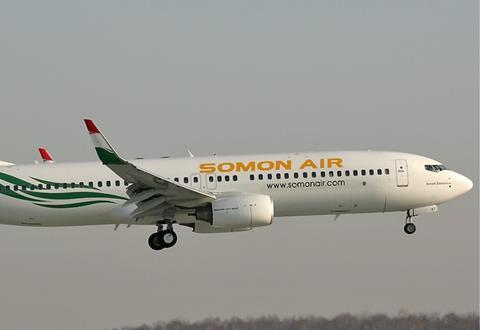