Turkish Airlines has undertaken a restructuring of its fleet plans, agreeing with Airbus to reschedule a number of deliveries.

The carrier adds that it has “adapted the overall outstanding orders”, taking into account operational and financial positions, to ensure a “solid basis” for the airline’s future.

Turkish Airlines has not detailed the extent of the changes but says it has reviewed its fleet plan in light of the crisis affecting the air transport industry.

Over the first nine months of the year the airline’s passenger numbers have fallen by 62% to 21.6 million, split almost equally between international and domestic.

The airline has yet to disclose third-quarter financial results, but it turned in an TL2.8 billion ($342 million) operating loss, and a TL4.2 billion net loss, for the first six months of this year. 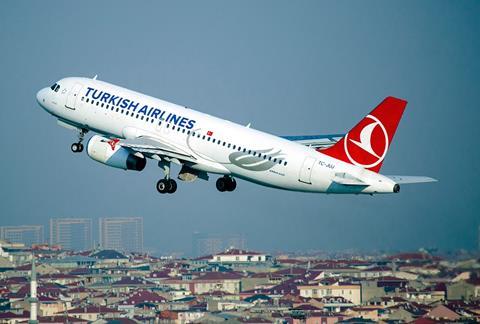 Turkish Airlines had taken delivery of 12 aircraft over the first half, including five Boeing 787-9s, two 777Fs, and five Airbus A321neos – taking its overall fleet to 362.

Its half-year financial statement did not include a detailed update to its fleet strategy, although the company said its original aircraft delivery plan for 2020-21, and the associated pre-delivery payments, were being “re-evaluated”.

Turkish Airlines mentioned in the statement that it had contractual commitments for 169 aircraft with delivery over 2020-25 – a change from its first-quarter update, in which it referred to 171 aircraft to be delivered during 2020-23.