Uganda Airlines takes delivery of its first A330-800

Airbus has delivered to Uganda Airlines the operator’s first A330-800, which subsequently departed Toulouse and is due to arrive at Entebbe on 22 December.

The aircraft (5X-NIL) is the first Airbus to be introduced by the African carrier, and the third -800 to be handed over after Kuwait Airways received a pair on 28 October.

Uganda Airlines has configured the Rolls-Royce Trent 7000-powered twinjet with 258 seats including 20 lie-flat business seats and 28 seats in the premium-economy cabin.

It will be able to use the aircraft, MSN1977, on planned long-haul services to the Middle East, Europe and Asia, says the airframer. 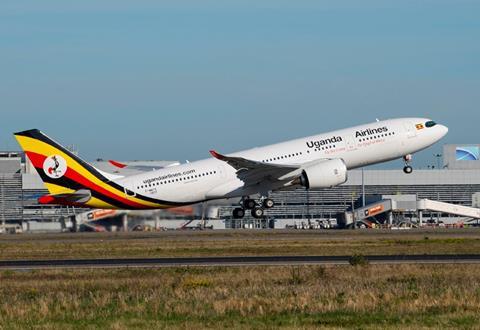 Airbus had delivered 14 A330s this year, up to the end of November, including 10 after the first quarter as the pandemic crisis engulfed the airline industry.

Seven of the 14 were A330-900s, with four going to Delta Air Lines, and one apiece to Citilink, Orbest and lessor Avolon.

Kuwait Airways’ two A330-800s complemented the A330neo deliveries, while Airbus handed over a single A330-300 to Aer Lingus and four A330-200 airframes to its military division for conversion.