UK start-up Flypop is introducing its second Airbus A330 after the twinjet was transferred to its London Stansted base.

It will deploy the aircraft on temporary cargo services with the aim of starting passenger operations during summer this year.

The airline is aiming to start long-haul flights to destinations on the Indian subcontinent, with cities including Amritsar, Hyderabad, Goa, Kolkata, Ahmedabad, Kochi and Chandigarh under consideration.

“We expect a surge in demand for low-cost flights to India from the UK from [the second quarter] onwards,” says chief executive Navdip Singh Judge.

It indicates that it will recruit another two aircraft for cargo services over the next few months. 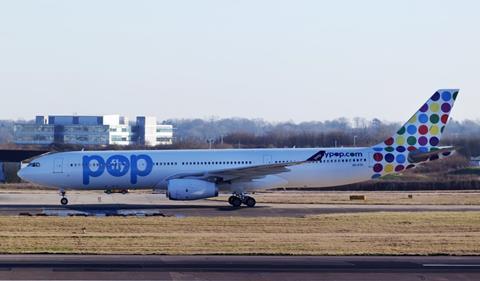 The airline’s second A330-300 is a 2013 airframe, MSN1420, originally delivered to Philippines carrier Cebu Pacific Air, and powered by Rolls-Royce Trent 700 engines.

It is Maltese-registered (9H-PTP) and operated by wet-lease specialist Hi Fly Malta.

Flypop says it has been co-operating with Hi Fly to conduct freight transport to address demand for cargo capacity.

Judge states that Flypop is “now a revenue-generating airline” and that it will be “continuing to grow” its fleet across the year, to serve both cargo and passenger markets.