Ukraine seeks to ban overflights by Pobeda and other Russian carriers

Ukraine’s government has approved a proposal to sanction 13 Russian companies, including several airlines which will face a three-year ban on overflying Ukrainian territory.

The measure is continuing evidence of the political tensions between the two countries whose relationship deteriorated after the Russian annexation of Crimea nearly seven years ago.

Ukraine’s government states that it has approved the proposal from the ministry of infrastructure covering “special economic and other restrictive measures” including the “total ban” on flights.

The proposal involving a “complete cessation” of flights will be submitted to the Ukrainian national security and defence council for consideration, the government says.

It has identified Pobeda, IrAero, KrasAvia, Komiaviatrans and Azimuth as being among the Russian operators, as well as smaller organisations such as Tulpar Air, Vologda Aviation, Simargl Air Company and others. 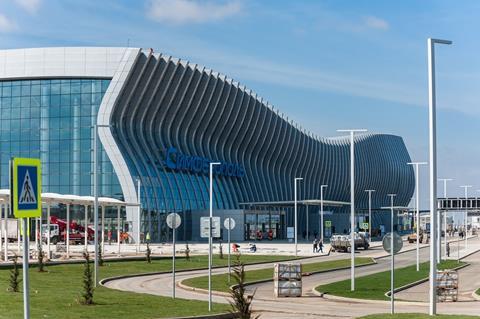 Source: Prosecutor’s Office of the Autonomous Republic of Crimea

Simferopol airport in the territory of Crimea annexed by Russia