Uzbekistan Airways is ordering 12 Airbus A320neo-family aircraft as part of a fleet modernisation.

Four A321neos and eight A320neos are featured in the agreement, although no delivery date has been disclosed.

The airline has five A321neos leased from CDB Aviation and three A320neos from BOC Aviation.

No engine selection for the 12 newly-ordered jets has yet been made. 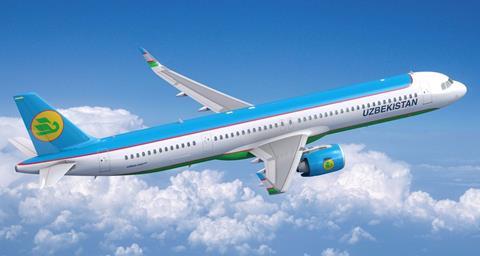 Uzbekistan is taking four A321neos as part of the agreement

But the airline is a strong CFM International customer – its A320s are fitted with CFM56s and all the A320neo-family jets are powered by Leap-1A engines.

“The contract signed with Airbus is a new step in our fleet modernisation strategy aimed at offering our passengers the most modern and comfortable aircraft,” says chair Ilhom Makhkamov.

Makhkamov adds that the expansion will enable the carrier to “strengthen our footprint in Central Asia”. All the aircraft will be fitted with the airframer’s ‘Airspace’ cabin interior.