Vietnam Airlines has warned of a consolidated loss of D10.8 trillion ($464 million) in the first nine months of 2020, as the coronavirus pandemic takes its toll on operations. 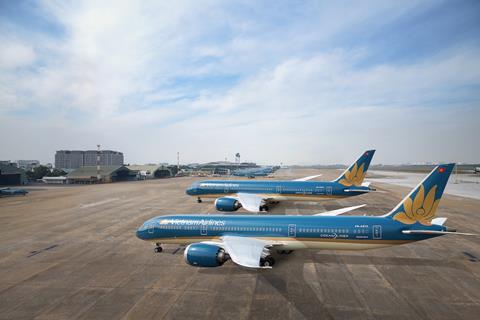 The consolidated loss represents a massive swing from the consolidated pre-tax profit of D3.3 trillion the airline generated during the first nine months of 2019.

The SkyTeam carrier lists a number of actions that it has taken to deal with the crisis, which includes cutting costs, extending payment schedules, reducing non-urgent investments, operating charter flights to repatriate citizens, restructuring its organisation, operating cargo flights, and disposing of older aircraft.

So far, Vietnam Airlines and Pacific Airlines have operated 100 repatriation flights, returning over 30,800 Vietnamese citizens from nearly 30 countries. It has also operated over 2,600 cargo flights.

Given that Vietnam has not opened to international travel, the airline is focused mainly on the domestic market. Vietnam has not recorded a local case of Covid-19 for 40 days, which has allowed domestic air travel to continue.

The airline says that the lack of international services continues to weighs heavily on its performance, “so the direct effectiveness for Vietnam Airlines Group is still at a very limited level.”

The airline is operating 60 domestic routes with an average of 300 flights daily. Passenger volumes are 12% higher than a year ago.