Virgin Atlantic Airways is to receive another pair of Airbus A350-1000s from US lessor Air Lease, under a new agreement between the two.

The airline will take delivery of the Rolls-Royce Trent XWB-powered aircraft in 2023 and 2024.

Air Lease says they will be sourced from the company’s current backlog of the type with the airframer.

At the time it stated that it would order eight of the jets directly from Airbus and take the remaining four from Air Lease.

Virgin Atlantic currently has eight A350-1000s in its fleet.

Airbus’s backlog figures for the end of November show that the airline has received five of the eight jets its ordered from the airframer.

Chief executive Steven Udvar-Hazy says the company has a “long history” with Virgin Atlantic, and the two additional A350s will add to the carrier’s “commitment to sustainable travel”. 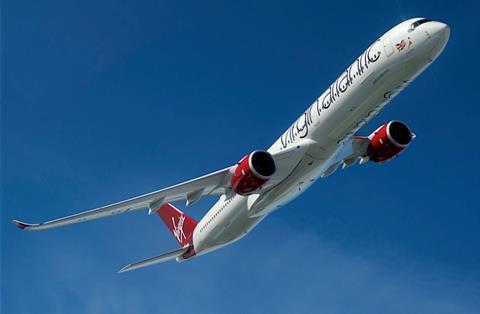