ALTA: Guarulhos expansion on schedule for May 2014 opening

"If they don’t open it by May next year, they’re going to have penalties," he says of Concessionaria Aeroporto Internacional de Guarulhos, which owns the 20-year concession. "We don’t know the service levels but it’ll be there."

The opening of Terminal 3 on 11 May 2014 is scheduled just in time for the airport to handle traffic for the FIFA World Cup, which begins on 12 June.

Located to the east of the existing terminal complex, the new facility will add 22 contact gates for "code C" sized aircraft – roughly the size of the Airbus A320 and Boeing 737 families – and nine remote aircraft-parking positions, TAM notes, and it can handle 11 code E or F sized aircraft, which include the Airbus A330 and A350 and Boeing 777 and 787.

Guarulhos with Terminal 3 (in red) 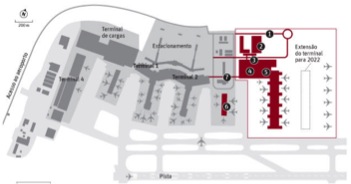 The expansion will increase annual passenger capacity at Brazil's busiest airport by 12 million to 42 million.

Guarulhos traffic was up more than 7% to 26.1 million passengers during the first nine months of the year, says the concessionaire.

Terminal 3 will initially be dedicated to international flights, says Bologna. TAM, which is Guarulhos's largest carrier, plans to relocate its international operations to the facility with its domestic flights remaining in Terminal 2.

The new facility will have 60 immigration counters for arriving passengers and 40 for departing passengers. This compares with 32 for arrivals and 20 for departures in both Terminals 1 and 2.

Discussions are ongoing between TAM and Guarulhos to finalise who will use Terminal 3, says Bologna. This includes whether the carrier’s Oneworld alliance partners – it joins in March 2014 – will also move to the new facility.

Delta Air Lines will remain in Terminal 2 in order to remain close to its codeshare partner Gol, says the Atlanta-based carrier’s vice-president of Latin America and Caribbean Nicholas Ferri.

Upgrades to Terminals 1 and 2 are planned once Terminal 3 opens, says TAM.

Terminal space has restricted airline operations at Guarulhos in the past. It took US Airways three years to secure Guarulhos slots that are viable – albeit still suboptimal, says the airline’s senior vice-president of marketing and planning Andrew Nocella.

US Airways began service to Sao Paulo with a morning northbound departure in June.

Runway capacity will increase by only four movements to 51 per hour with the new terminal. TAM calls the limited increase an "active restriction".

"We have two runways at Guarulhos but they are not operating simultaneously," says Bologna. However, he adds that work to implement Category III ILS operations and GPS-based RNP approach technology at Guarulhos is ongoing.

Airports Company of South Africa (ACSA) and Brazil’s Invepar own 51% of Concessionaria Guarulhos, with Infraero holding the remaining 49%.