Antonov on 7 May conducted a first flight with its An-178 transport, just three weeks after it staged a roll-out ceremony for the type in Kiev.

Two test pilots and one flight test engineer were aboard the twinjet for its 1h debut, says Antonov. The aircraft carries the registration UR-EXP. 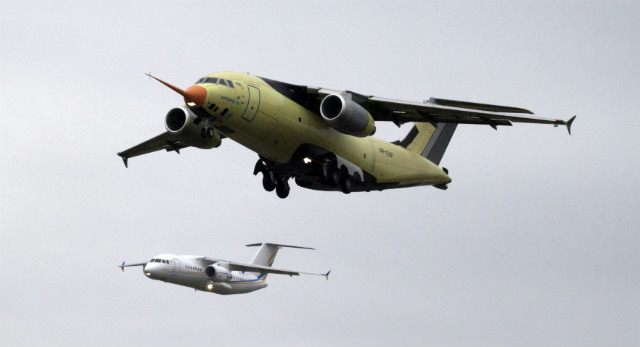 "The crew reported on a successful flight task realisation," the company adds in a brief statement about the milestone event.

A further development of the An-148 regional airliner, the An-178 is intended to perform transport tasks for civilian and military customers. With a rear ramp, it is expected to be capable of carrying up to 18t of cargo.

Antonov confirms 10 transports as being on order from launch customer Silkway Airlines, "as well as a protocol of intent" with the Chinese company Beijing A-Star Airspace and Technology. The Chinese partners have expressed their intention to purchase two An-178s, and to also consider the prospect of Ukrainian construction of a "transporter in China", says the airframer.