The last 18 months have changed perceptions of air traveller safety. The good news is that there continue to be very few serious fatal airline accidents, but that has been offset by three disastrous events that were not accidental.

Another factor affecting public perception is the development of far more rapid dissemination to the media of information about the losses.

Within almost exactly a year of the loss of Malaysia Airlines flight MH370 – still a mystery – the travelling public was subjected to another strange airliner loss: that of the Germanwings Airbus A320 in the French Alps.

Not only did the A320 crash in unusual circumstances, but almost immediately after it went down, reliable detail based at first on commercial flight tracking information available on the web, and then on facts from the flight data and voice recorders, was quickly broadcast around the world. The co-pilot had apparently deliberately crashed the aircraft with 150 souls on it, the public were told.

The agency for the public release of recorded data about the Germanwings loss was the French prosecutor responsible for the case, who delivered the information directly to television cameras near the impact site. His data source was the French accident investigator, the BEA. In France a judicial prosecutor works in parallel with the technical accident investigators. The cockpit voice recorder (CVR) was found within 48h, and it was on the basis of CVR and air traffic control radar data that the verdict was delivered. The flight data recorder (FDR) was not found for another week, but when it was, the information backed up the inferences from the CVR.

The result of the rapid disclosure of data was that the public quickly became remarkably well-informed about the crash, although they – and even the media themselves – struggled to comprehend the event’s significance for air travel, especially following the MH370 disappearance a year before. Four months later, Malaysia Airlines flight MH17 – a Boeing 777 – was shot down over eastern Ukraine, and suddenly air travel stopped feeling as reliable and safe as it had done, despite the fact that statistics for actual accidents continued to show safety was steadily improving against figures that were already the best in aviation’s history. 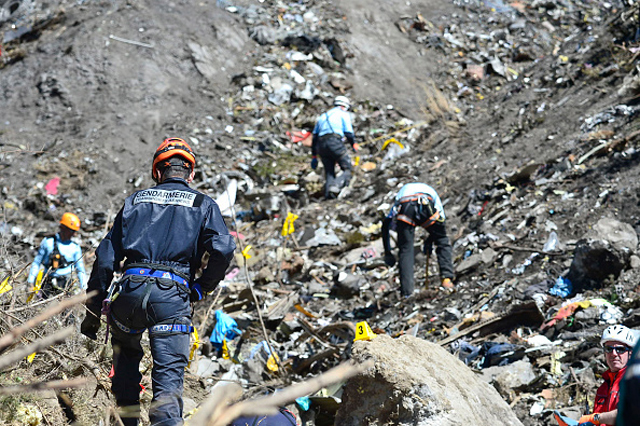 In the light of all this, what of the first six months of 2015? There have been six fatal airline crashes, one of them the Germanwings loss, but five of them accidents, according to the traditional definition of that word.

In the five fatal accidents this year, 65 people died, while another 150 were killed in the Germanwings aircraft. This bears comparison with the first six months of 2014, where there were five fatal accidents causing 28 deaths, plus the enigmatic disappearance of MH370 in which 239 people were lost.

There are other parallels between the first half of this year and the same six months in 2014. In both years there were no accidents involving jets, and all the aircraft that did crash were small and carrying few people. The one exception to that description occurred this year when a TransAsia ATR 72-600 carrying 58 people crashed, killing 43 of them. That single accident accounted for most of the difference between the fatality totals in the two years despite the number of fatal accidents being the same.

The TransAsia crash this year – for which the FDR and CVR information was also rapidly made public – reinforced a powerful and growing regional perception of an apparent safety collapse among Asian carriers. This perception had been slowly building within the Asia-Pacific media since MH370 went missing in March 2014. Then in July 2014 there was the MH17 shoot-down and, a few days later, a TransAsia ATR 72 crashed on approach to Makung in Taiwan’s Penghu Islands, killing 48 people. When that was followed by the December 2014 crash of an AirAsia Indonesia A320 in the Java Sea killing all 162 people on board, the region’s media started asking questions of expert commentators that revealed genuine nervousness about the safety of local airlines. Then in February this year, just as the media were beginning to calm down, TransAsia had its second fatal ATR 72 crash in six months.

It is a moot point as to whether perceptions rather than reality should be the subject of this analysis, and whether perceptions have any bearing on safety for the future. But not only are accident investigations becoming more open, the effects of social media cannot be ignored. A Flightglobal analysis of the effects of social media in February observed: “The digital might of ordinary citizens now has the power to bury the brand image of an airline in the seconds it takes for 140 tweeted characters to go viral.”

So perceptions of airline safety combined with investigatory openness and citizen journalism/social media have the power to put pressure on airlines to be highly safety-aware, and to persuade all except the smallest operators to have a crisis communications setup. It has been difficult for some time to work out why safety statistics, already outstanding, keep getting better, but this kind of pressure on airline boards may be one of the factors.

Meanwhile it used to be true that the industry learned about accidents by having them and then analysing them. Now that only a few accidents happen – and they hardly ever affect big jets or major carriers – where is the future’s safety wisdom to come from? And equally importantly, how will the industry maintain consciousness of continuing risk? The risk of complacency must surely be high when everything seems to be going well.

Conventional wisdom says incidents and good reporting systems – encouraged by a just culture – are the answer, because they hold the clues to areas of risk. And if today’s accidents rarely involve a hull loss or fatalities, what do they involve? Are they trivia that could safely be written off?

The clues are in the non-fatal section of the accident list (see below). It is clear from the list that airlines should work out how to prevent approaches that end in damaging hard landings or expensive tail-scrapes, and runway excursions on landing. These are often, but not always, associated with difficult weather conditions like windshear.

Runway excursions may usually be non-fatal and do not usually involve a total hull loss, but they are the industry’s biggest single risk and constitute a huge expense. But despite a growing awareness of this risk since the Flight Safety Foundation began a campaign to raise its profile almost a decade ago, hard landings and runway excursions do not appear to be diminishing. Also, it is an accident category that still affects the big carriers and big jets as well as the commuters. If the industry could find a solution – or at least a mitigation – to runway excursions, it would reduce risks and costs massively.

Airlines have been working on solving the problem by improving crew discipline to ensure stabilised approaches. But this list suggests a study specifically of crews’ responses to weather conditions and windshear at landing would be useful.

These days an aircraft’s type or design is rarely cited as an accident cause or contributor, but occasionally accidents occur that make it look as if this might have been a factor, even if it turns out to be coincidence. For example the two fatal accidents this year to non-passenger flights (see accident list) both involved Swearingen Metros, and both carried out remarkably similar short flight profiles after take-off before diving to earth. One of them, however, was a post-maintenance test flight, the other a normal commercial departure.

The other aircraft type that has cropped up in the accident lists this year having featured several times recently is the Xian MA60 twin turboprop utility/commuter aircraft, a modernised Antonov An-24 descendant.

Joy Air’s Xian MA60 suffered a 6g landing at Fuzhou, China, when it developed a high rate of descent on short final approach because the pilot flying mistakenly selected the power levers to ground idle while still airborne. In June 2013 almost exactly the same actions in the same flight phase led to substantial damage for a Merpati Nusantara Airlines MA60 in Indonesia.

Ascend’s fleets database records that this was Joy Air's second accident with the MA60. In February 2014, the nose undercarriage of a Joy Air MA60 collapsed during landing at Zhengzhou. Between 2009 and the recent Fuzhou incident, there have been 13 accidents involving the MA60. Among these was one fatal accident and four total losses. Of the remaining accidents, six suffered major damage.

The single MA60 fatal accident occurred in May 2011 to a Merpati aircraft that crashed into the sea while approaching Kaimana airport in stormy conditions. Other total losses include two aircraft operated by Merpati, as well as one operated by Air Zimbabwe.

Ascend Fleets shows 66 MA60s in service globally, with 28 aircraft in storage, but there are 75 firm orders for it on the cards, so the MA60 remains popular with commuter operators. But if perceptions regarding safety performance, rather than actual safety, are now going to drive passenger choices, airlines would be wise to review the way they operate their MA60s.