A decade after Boeing built the last passenger variant of the 747-400, more than half the delivered fleet remains in service in the airline role, but the retirement rate is beginning to build momentum. 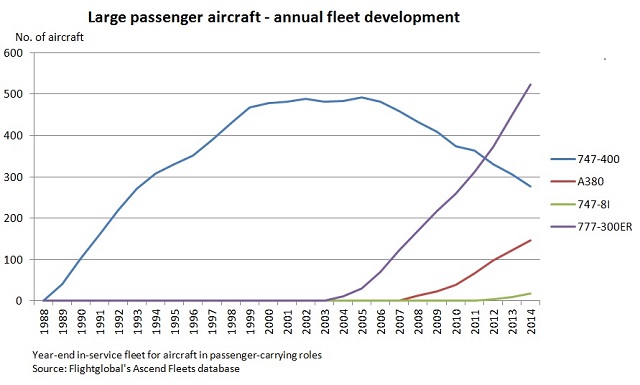 Flightglobal's Ascend Fleets database shows that the operational passenger fleet peaked at around 490 aircraft in 2005 as those last -400s were delivered. At the time, British Airways was the largest 747-400 operator with 57 aircraft in service and other major users included Japan Airlines (42), United Airlines (31) and Lufthansa (30). Operators with fleets in the 20-30 unit range included Qantas, Singapore Airlines, Korean Air, All Nippon Airways and KLM.

The fleet has been declining gradually by 5-10% each year as aircraft have been retired from passenger operations and either moved to the all-cargo role or parked. Ascend Fleets shows that the current operational fleet slipped below 300 units during 2014 and now stands at 278 aircraft.

BA remains the largest operator with 44 in service, while United, KLM and Transaero all have fleets in the 20-25 unit range. The global fleet has declined by 28 aircraft during 2014, with BA and Cathay Pacific making the largest retirements (six aircraft each). And during the last 12 months, three long-standing 747 operators retired their last aircraft: Air New Zealand, ANA and Philippine Airlines withdrew a combined nine aircraft between them.

The Flightglobal Fleet Forecast long-term outlook produced by the Ascend consultancy predicts that the 747-400 passenger fleet will gradually continue to decline at around 10-20% per year, with fewer than 100 units expected to be in operation by around 2021/22. However, Ascend sees a "long tail" in 747-400 operations and forecasts that there will still be around 70 -400s in passenger service a decade from now. This would mean that the fleet would be larger than that of its successor, the 747-8I, which Ascend does not expect to exceed 50 deliveries.

"We expect the 747-400 fleet decline to continue along the line of the current trend as operators like BA replace the aircraft at their end of life with next-generation types. Further to this, the lack of passenger-to-freighter conversion opportunities in the current and future market is another key driver of this decline," says Ascend's consultancy chief Rob Morris.

"But a limited number of aircraft will transition to second and tertiary passenger operators, resulting in the elongated tail," he adds. 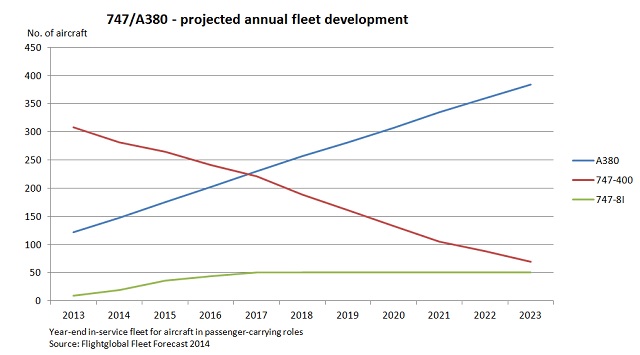 The major operators are gradually pulling back from 747 operations as they introduce replacements such as the 777-300ER and/or Airbus A380 and 747-8I. Since the last passenger 747-400 delivery in 2005, almost 700 of these three types have entered service.

BA says the 747 still offers flexibility for capacity management and would prefer to retain some until the newest twin-engined aircraft, such as the A350-1000 and Boeing 777X, are available. As such, the airline is investing in a cabin refurbishment programme for the aircraft that will be retained for the longer term.

Delta Air Lines will have reduced its 747 fleet to 12 aircraft by the end of this year as part of its Pacific network restructuring. The entire fleet is due to have been withdrawn by 2017.

As part of its three-year A$2 billion ($1.7 billion) cost-cutting programme, Qantas has accelerated its 747-400 retirements, and its fleet will decline by four units to nine aircraft by the end of 2015.

Between them, the Air France-KLM group carriers have a large 747-400 passenger fleet, with the Dutch arm flying 22 aircraft and the French division operating six aircraft. However, they diverge on their retirement strategies, with Air France planning to phase out its fleet next year while KLM aims to retain the type until 2022.

As Virgin Atlantic pursues its stated strategy to transition from four-engined operations to twinjets, it aims to phase out part of its 12-strong 747-400 fleet from 2016 onwards.

Ascend data shows that there are still 28 operators of 747-400 passenger aircraft, and that the fleet's average age is 18-19 years. The single largest fleet by age is aircraft delivered in 1998 (37 units), and more than 100 aircraft currently in service are 20 years old or more. But there is clearly a lot of life in the old dog yet. 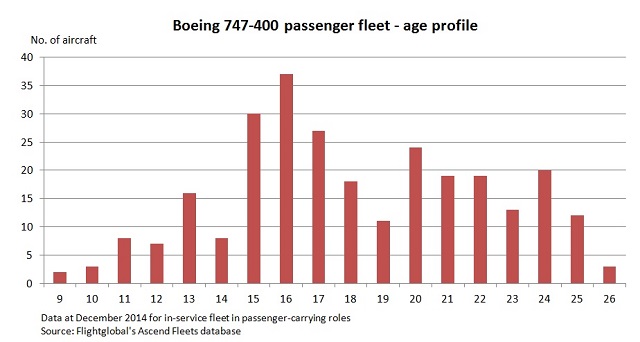 Article amended to reflect current active BA 747 fleet, which stands at 44 aircraft rather than 43 previously reported