China Eastern Airlines signed for 15 787-9s on 28 April, becoming the last of the big four Chinese carriers to commit to the type.

While Boeing boasts that there is a 787 landing or taking off in China every 13 minutes, the country itself has a relatively small fleet of 26 787s in service, accounting for about 6.6% of the global in-service fleet. All of these are the smaller -8 variant and powered by General Electric GEnx engines.

China Southern Airlines and Hainan Airlines each account for 10 -8s, while Xiamen Airlines has six of the type in operation, Flightglobal's Fleets Analyzer shows. 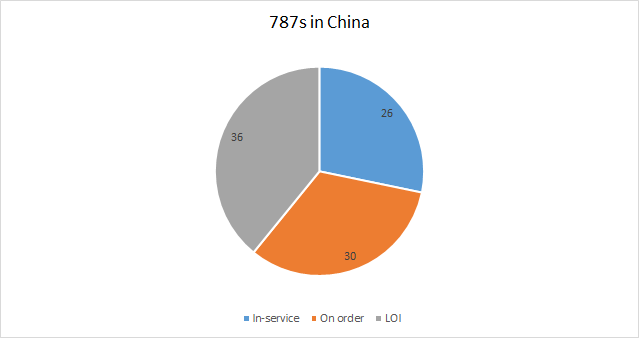 The larger and longer range -9 variant, however, appears to be gaining greater traction, with commitment for more than 65 aircraft. China's first -9 is expected to go to Air China this month.

China Eastern's recent order, joins Air China's backlog for 15 - the only 787s in the country to be powered by Rolls-Royce Trent 1000 engines.

Hainan Airlines has a letter of intent for 30, and will also take -9s from lessors this year. Flightglobal understands that though still undisclosed, Xiamen Airlines has also signed for six -9s, the first of which will be delivered at the end of the year.

FlightMaps Analytics shows that China Southern, Hainan and Xiamen are deploying the majority of their 787s on intercontinental services to Australia, Europe and North America. Interestingly, a number of these services originate not from the main hubs, but from tier two cities such as Changsha, Wuhan and Fuzhou.

These are China Southern's services from Wuhan to Rome and San Francisco, Hainan's Changsha-Los Angeles route, and Xiamen's Fuzhou-Sydney service. All these routes were launched by the airlines using 787s. 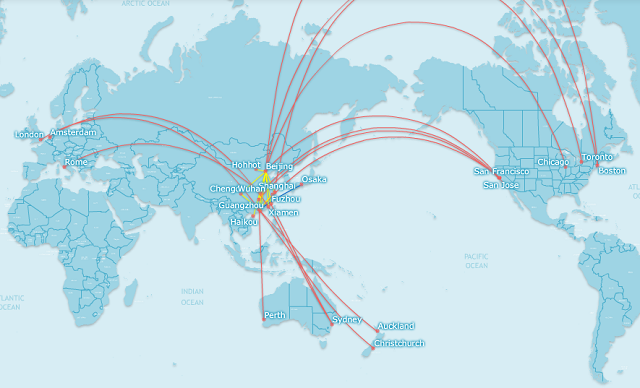 Hainan has been on the offensive when it comes to expanding its North America network with the 787. Besides Changsha-Los Angeles, it deploys the type to Chicago, Boston, San Jose and Toronto from Beijing and/or Shanghai.

Guangzhou-based China Southern has been using its 787s to reach Rome and London, as well as to strengthen its dominant China-Australia position. Xiamen Airlines, meanwhile, has used the 787 to launch its first intercontinental services to Amsterdam and Sydney.

The long-haul launches come at a time when Chinese demand, powered by growing disposable incomes, for long-haul trips is growing.

Earlier this year, Boeing told Flightglobal it expects to close more 787 deals in China this year, especially for the -9 variant.

Senior vice-president of sales and marketing for Northeast Asia Ihssane Mounir says the -9s will help Chinese carriers access cities such as New York and Washington D.C. in the US east coast, where the -8s have mostly been limited to the west coast.

He adds that Chinese carriers are “making a lot of money” using the -8s on “unusual city pairs” such as between Beijing and Seattle, Boston and San Jose.

Its chief operating officer Zhao Dong tells Flightglobal the airline’s next step is to fly from Fujian to New York and from Xiamen to Los Angeles, which it plans to do, using its incoming -9s.

While it has not gained any order for the -10, Boeing is pitching the variant as an alternative to the Airbus A330-300.

LACK OF EARLY SLOTS FOR A350

In comparison, Airbus’ order book for the A350 in China appears modest, with firm orders for only 20 A350-900s with China Eastern, and 10 with Air China.

In fairness, the A350 only entered service with launch customer Qatar Airways in January 2015, whereas the 787 has been in commercial operation since 2011.

Airbus expresses confidence that the A350 is the right aircraft for Chinese carriers to operate to Europe and North America, but admits that the lack of early delivery slots is a major challenge as it pitches the type to Chinese airlines.

The problem, is that Chinese carriers plan fleet requirements in five-year periods, and are cautious when it comes to ordering aircraft beyond that timeframe, says Airbus China president Eric Chen. The next five year period cover 2016-2020.

“Our industrial constraint is that you need to place the order well in advance to ensure delivery at a given period… so with 800 A350s being ordered, of course it’s a mathematical exercise,” he adds.

Airbus's A330, however, remains popular with Chinese operators, both on domestic and long-haul internationals routes. When Airbus inked the agreement to set up an A330 completions centre in Tianjin last year, Beijing reciprocated with an order for 45 A330s, and later also firmed up options for another 30 of the type. The A330neo is also expected to do well in the country.