ANALYSIS: Air NZ plays to its strengths as competition rises

Air New Zealand’s record profits are under threat as Qantas and partners Emirates and American Airlines circle Middle Earth, but the carrier remains well positioned against any further onslaught from the three carriers.

The Star Alliance carrier reported an operating profit of NZ$457 million ($304 million) for the six months to 31 December 2016, more than doubling the previous corresponding period. That was on the back of strong inbound demand, which saw revenue shoot up by 12% to NZ$2.7 billion.

How long that performance can be sustained in the face of a more competitive market remains in question though, particularly as Qantas positions Jetstar to take on more of the domestic New Zealand market, and Emirates and American stalk the long-haul market.

December saw Jetstar launch its first regional New Zealand services with five Bombardier Q300 turborops, taking on what has been a long-term monopoly for Air NZ.

Speaking at his own half-year results briefing, Qantas chief executive Alan Joyce noted that the launch of the regional services has been well received.

“The reaction from regional and local communities has been overwhelming, and the Jetstar performance on these routes has been well ahead of our expectations,” he said.

Even with the expanded Jetstar network now in place, Flightglobal's FlightMaps Analytics shows that Air NZ still enjoys the lion's share of seat capcacity, ASKs and frequency on the domestic market. 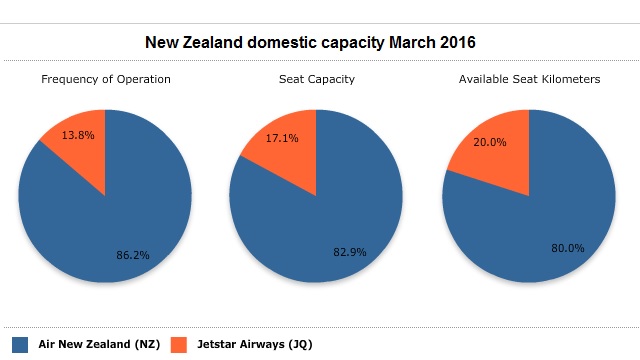 This year will also see more threats to Air NZ emerging on the long-haul market, with Emirates launching daily non-stop Dubai-Auckland services on 1 March, and American re-entering the Los Angeles-Auckland route from June.

Joyce has welcomed both services, saying that it was a “rising tide” that would lead to more feed from the two carriers onto Jetstar’s domestic network.

Emirates’ move appears to be targeted at picking up a greater share of traffic between Europe and New Zealand, and providing an alternative to its one-stop services that operates via Australia’s east coast. Although the regular services will be operated with Boeing 777-200LRs, Emirates sent an A380 on the inaugural service on 1 March – perhaps as a signal of how serious its intentions are for the route.

The American move later this year will shake up Air NZ’s grip on North American routes, at a time when the market has been growing thanks to strong inbound tourism linked to the lower New Zealand dollar. 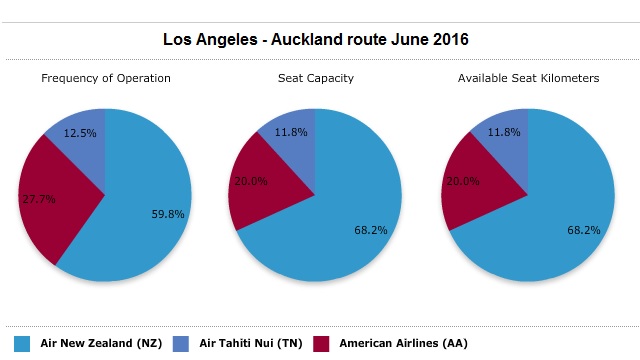 Despite the looming competition coming to one of its flagship routes, Air NZ chief Christopher Luxon expects that it may actually help to absorb some of the one-stop traffic between the two countries that presently goes via the Pacific islands or Australia.

“American coming onto the route will take away a lot of that indirect traffic that doesn't currently travel, frankly, on Air New Zealand today, and will also do a good role in terms of actually stimulating demand,” he said during a recent conference call following the release of its first-half earnings.

Nevertheless, Luxon is taking the threats in its key market seriously, but is not buckling under its weight.

“Let's be clear, we're in competitive battles. Air New Zealand is more than holding its own, and customers are supporting us and value the customer experience that we have put in place,” he said.

Arguably, the airline has been positioning itself for such a time as this, by choosing to grow new markets, such as Houston, Buenos Aries and later this year, Ho Chi Minh City.

Whilst Los Angeles will become a more contested market with American’s entry, its Houston services appears to be paying dividends.

“Forward bookings on this route are strong, especially out of the US, and I'm very happy to say that from day one Houston is a positive contributor to our North American network,” said Luxon.

That service also appears to have strengthened its relationship with United Airlines, which provides it strong feed across the southern US at Houston.

For now, that gives it a strong position in the market, albeit one that could be weakened should American choose to add services from its massive Dallas-Ft Worth hub to Auckland. In the short term however, its focus is likely to be on bedding in the Los Angeles routes rather than adding another service to Auckland.

On the domestic front, Luxon said it remains in “is in really good shape” even with the increased competition. Nevertheless, he has flagged that there will be changes to its domestic schedules coming up over the remainder of 2016, aimed at reducing complexity, and ultimately helping to drive down unit costs.

“The new schedule will also result in much greater choice and flexibility by improving connectivity, frequency and consistency across the domestic network,” he added.

Such tactical moves are likely to be used across the wider network should its rivals continue to gain more traction. With its fleet of 777-300ERs and -200ERs largely devoted to the Americas markets, Air NZ has some flexibility to adjust capacity as necessary there.

On the Europe market, the airline has cut back to only serve London-Heathrow with a daily frequency, having at one time also flown via Hong Kong. But it also offers frequency through connections on Cathay Pacific and Singapore Airlines, which gives it strong offerings against any further onslaught from Emirates on the Asia-Europe Europe market.

Overall, the additional capacity coming from the likes of Jetstar, Emirates and American is likely to put some pressure on Air NZ’s profits over the coming year. Nevertheless, there is little to suggest that it is at a strategic disadvantage, and has shown that it is ready to respond.