Aerion's planned production system for its AS2 supersonic business jet is evolving as Airbus's role in the programme begins to deepen.

At last year's NBAA convention it was revealed that Airbus had agreed to partner with Aerion, giving the supersonic project its long-sought major OEM partner. The original disclosure involved only the Airbus Defence & Space division, but the airframer's commercial group has already become involved, Aerion vice-chairman Brian Barents revealed on 21 September at the Wichita Aero Club – where he delivered the first major programme update since the EBACE exhibition in May.

In particular, notes Barents, the Airbus engineering centre in Wichita is participating directly, with that facility's director John O'Leary attending an internal programme review at Aerion's offices in Reno, Nevada, this month.

Aerion also plans to leverage Airbus's network of major component assembly fabrication plants in Europe for the construction of the AS2, but final assembly will take place in the USA, Barents says. The target location is a site with access to a deepwater port to receive the major subassemblies from Airbus's plants in Europe, he says.

The set-up is not unlike the concept for the A320 final assembly line now operational in Mobile, Alabama, which is located less than four miles (6.5km) from a deepwater port. Airbus also ships another major component assembly – the Section 15 centre fuselage for the A350 – to France from a Spirit AeroSystems factory in Kinston, North Carolina.

When Airbus disclosed its involvement, it was not clear how much influence it would bring to bear on the design of the supersonic aircraft. But Airbus officials have already taken a firm position on a key design point for the AS2. Aerion has always preferred to design the aircraft with a composite fuselage, but Airbus is pushing its new partner to rely on a more conventional metallic structure.

"We were leaning towards composites," says Barents. "Since collaborating with Airbus, they're kind of trying to convince us that a metal fuselage will be the best way to go."

Airbus Group chief executive Tom Enders said in an interview earlier this year that supersonic travel was a long-range objective for the group, telling a French journalist in February that he envisions a distantly future Airbus aircraft that could fly from Paris to Sydney, Australia, in 2h. 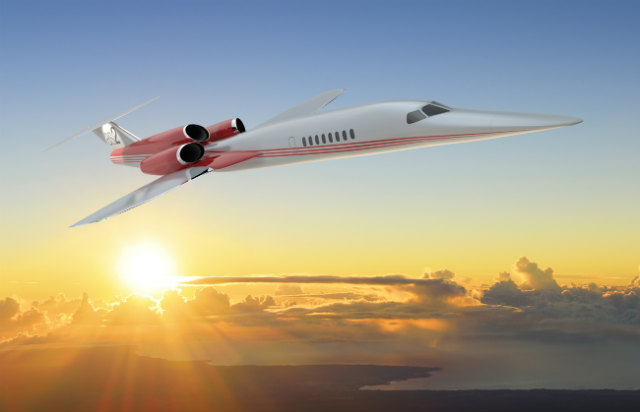 Despite those long-term ambitions, Airbus has never described its partnership with Aerion as a stepping stone to a supersonic transport. Aerion, however, believes its key technical breakthrough – a supersonic natural laminar flow wing – is scaleable to a "small airliner" that could be introduced within 10-15 years, Barents says.

That said, Aerion officials believe a different technical quality of the AS2 drove Airbus to become involved in the project. Believing that US regulators would not soon lift the ban on overland supersonic flight, Aerion designed its wing to cruise most efficiently at both Mach 1.5 and subsonically at M0.95, which is one-tenth of a Mach number faster than any current airliner.

"They really have no interest in supersonic transportation, but they do have interest in the natural laminar flow technology as it relates to high subsonic regimes," Barents says. "One of our sweet spots is M0.95. As they look at commercial applications years from now, they want access to our technology."

Meanwhile, Aerion has asked US and international regulators to create a special community noise standard for supersonic aircraft. Any relief would help the company reach its newly extended range goals for the AS2 but, Barents says, may not be necessary to get the supersonic aircraft certificated, depending on how an ongoing engine selection process is resolved.

The engine selection process was due to wind up by the end of this year, but is now set to continue into 2017, Barents says.

All three potential suppliers – GE Aviation, Pratt & Whitney and Rolls-Royce – are participating in the selection process, with both military and commercial engine cores in consideration. The supersonic application requires a rating of about 16,000lb-thrust, but with a core size typical of much larger engine thrust categories due to the high-speed requirement. That is likely to eliminate an emerging class of business jet engines, such as GE's Passport, P&W's PW800, Rolls-Royce's BR725 and the Snecma Silvercrest.

An unnamed engine candidate has emerged as an early favourite, Barents tells Flightglobal. It may be capable of meeting the demanding requirement for supersonic cruise speed along with new regulations set to take effect in 2020 limiting take-off noise made by aircraft in communities adjacent to airports, he says. Barents does not identify the company or engine, but does clarify that an adaptive bypass airflow system is not needed to meet the noise and speed requirements.

The trijet AS2 redesign that Aerion revealed in May 2014 remains the company's default configuration, but a twin-engined aircraft has not been ruled out. The engine selection process will determine whether the first AS2 moves into production, Barents says. 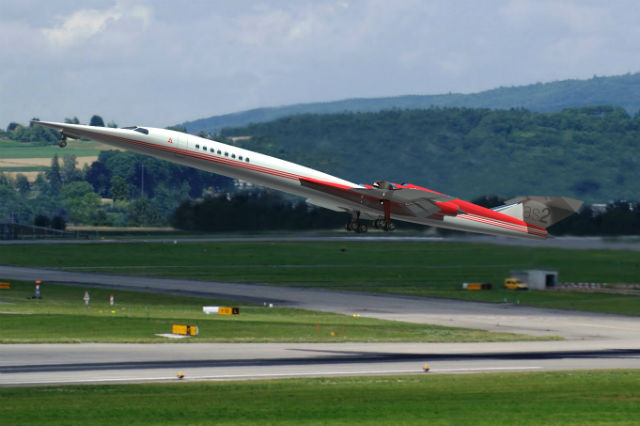 A global financial crisis in 2008 did not claim Aerion as an immediate victim, but the supersonic aircraft project is still subject to the lingering effects of the ill-timed recession.

The partnership with Airbus solved only one of Aerion's long-term needs: strong support from a major manufacturer for certification and manufacturing, while injecting a new level of credibility in the project.

The 2008 recession, however, extended early development by several years, as potential industry partners seemed more focused on survival than expanding into supersonic territory.

By 2014, those delays caught up with the programme's regulatory standing. Aerion's original plan to power the jet with a pair of P&W's proven JT8D engines suddenly appeared vulnerable, as ICAO adopted new community noise regulations to take effect in 2020 that will disqualify using the powerplant for a supersonic application.

That step has led to Aerion's ongoing process to select a new engine, which, Barents says, is focused on selecting a design that can meet the supersonic speed goal with a 5,000nm (9,250km) range, along with the new community noise standards.

But Aerion is seeking relief from the new standards anyway. ICAO's current regulations allow a Boeing 747-400, for example, a higher noise threshold than a twin-engined 777, Barents says, as a result of an exclusion process based on economic viability. A higher-gross-weight 757-300 also is allowed to emit more noise on take-off under ICAO regulations than a 737, he adds.

So Aerion is asking the US Federal Aviation Administration and ICAO to create a new standard on community noise for supersonic aircraft, Barents says.

"Such a new standard would enable the development of supersonic aircraft that are aerodynamically efficient, minimise community noise emissions, and be consistent with maintaining economic viability," he says.

But the regulation could benefit Aerion's potential rivals even more than its own aircraft. The AS2 is being developed to cruise efficiently at M0.97 overland, but others, including NASA, are pursuing "low-boom" supersonic aircraft, which use aerodynamic shaping to muffle the noise created by a sonic boom. Such a design would require the US government to amend a law banning any supersonic flight by civilian aircraft over populated areas.

In Barents' view, however, the aerodynamic penalties imposed by the low-boom shape also would render it infeasible to comply with the new community noise regulations.

"The new generation of low-boom supersonic jets will not get off the ground due to community noise – and I mean that quite literally," he says.