European low-cost airlines' rise to prominence over the past 10 to 15 years has brought new opportunities for airports to fund their infrastructure needs – but they have learnt that this comes with its own challenges.

On the positive side, Ryanair, EasyJet and Wizz Air have been major drivers of traffic growth, opening up new routes and developing previously under-served and unserved markets.

Previously restricted to a junior role within legacy carriers' hub-and-spoke feeder systems, regional airports have seen their point-to-point networks liberated thanks to low-cost carriers, while many smaller facilities can thank them for providing their first commercial scheduled links. And as traffic and services have grown, so airports have received a badly needed revenue boost to fund their expansion.

"Without the growth of low-cost carriers in Europe in the past two decades, our aviation infrastructure would be in a parlous state," says Chris Chalk, aviation practice leader with transport consultancy Mott MacDonald.

"Low-cost carriers have driven a transformation of the industry that has maintained an overall strong growth across Europe whilst legacy airlines have refocused their markets. With more people travelling in Europe than ever before, this presents increasing opportunities for airports to pay for the infrastructure that is needed," he adds.

But the low-cost revolution can also come at a price. As passenger traffic has grown so too have the demands on infrastructure with airports needing to invest in costly terminal expansion or refurbishment projects.

Airports usually have number of ways of raising the necessary funds, including raising loans, private investment and government grants – but perhaps the most common strategy is to increase aeronautical charges.

Statistics from RDC Aviation show that on average airport charges have risen slightly across Europe over the last four years. 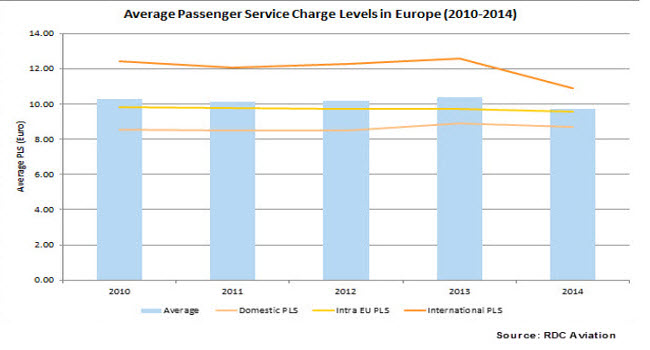 "It's interesting to note the international charge has fallen, although these are just the passenger service charges (also known as PSC or PLS) and don't include security fees," says RDC's managing director Peter Hind, adding: "There has been a trend to reducing the PSC but increasing security charges, in recent times – and of course, international services are more security intensive than domestic."

The problem is that airlines are often unwilling to pay higher fees. While large hub airports are largely immune from the demands of the low-cost giants, small airports can find themselves strong-armed by a dominant low-cost airline into keeping charges to a minimum, or face the risk of their main customer decamping to a nearby rival.

Angela Gittens, director general of airport trade body ACI World, notes that a lot comes down to the relative market power of the airline and airport involved.

"If these are the only carriers you can get to serve your airport, then they can drive very hard bargains and, depending on how hard the bargain is, you might be worse off," she says, adding: "Your community may be better off, but you as a corporate entity may be completely sacrificed for that to happen."

Gittens says a lot depends on the ownership model of the airport. For regional airports that are government-owned, making a loss may be a "price worth paying" for the external benefits that new air services offers to communities.

In some cases, airports may even have to introduce a host of incentives such as marketing support and discounts for starting new routes. Under these circumstances, new funding models are needed. But airports run by private operators are much less likely to accept such a situation.

Recent research from ACI Europe shows a that 42.5% of Europe's airports are making an annual loss, and this proportion rises the less traffic the airport handles. On top of this, the European Commission has introduced legislation restricting state aid in a bid to boost their profitability. Under these circumstances, new funding models are needed.

In an attempt to convince low-cost carriers to pay for new infrastructure, some European airports have attempted to tailor their new facilities to meet specific demands – resulting in the emergence of the so-called dedicated low-cost terminal.

Built to a simple design with an emphasis on efficiency and low cost, the dedicated pier or terminal has proved popular with some carriers, such as EasyJet, which uses Copenhagen's "CPH Go", Bordeaux's Billi and Lyon Saint-Exupery's Terminal 3, for example.

CPH Go offers its resident carriers lower charges but only in exchange for set criteria governing airlines' use of it, including maximum turnaround time of 30min and a requirement that at least 90% of passengers check-in either online, via mobile phone or at the self-service kiosks.

"The most important consideration for the airlines is efficiency," says Ole Wieth Christensen, director of airline sales and route development at Copenhagen Airports, adding: "The low-cost carriers are always looking for ways to improve turnaround times of aircraft and increase passenger flow; Go is designed to help them do this.”

Singapore Changi's budget terminal closed in 2012, but the concept still has currency

Today, CPH Go is used by Transavia and EasyJet, and the airport says it "achieved a historically high acceptance rate" in striking a new charges deal with EasyJet in September.

At Bordeaux's low-cost Billi terminal, meanwhile, there is again emphasis on driving efficiencies but also on maximising non-aeronautical revenues.

"The ratio of retail per passenger is far above what we find at other terminals and this helps to maximise shopping revenues. Billi is 4,000m² and we have 800m² of dedicated shopping space," says Jean-Luc Poiroux, director of commercial development at Bordeaux.

"The high level of commercial activities which generate higher revenues for the airport counterbalances positively the lower PSC offered to airlines," Poiroux adds.

But not all low-cost carriers are fans of these facilities. At Lyon, for example, while airlines such as EasyJet, Transavia and Wow Air operate from Terminal 3, other carriers such as Vueling fly from Terminal 1.

"Vueling chose to differentiate themselves from the rest by operating from what you might call the mainstream Terminal 1. This is where Iberia and British Airways are also operating," says the airport's sales and marketing director Stephane Geffroy, adding: "Their [Vueling's] strategy to have a better customer experience, not a simplified one, in order to differentiate themselves."

Another way airports have sought to reduce the uncertainty around revenues is by agreeing long-term traffic deals with low-cost carriers, under which an airline pays reduced passenger charges and fees in return for delivering a set level of passenger traffic over a given period of time.

One example of this is approach can be found in Manchester Airports Group (MAG), which in 2013 struck traffic deals with Ryanair and EasyJet among others at Manchester and London Stansted airports. The operator agreed to what Ryanair called "a package of lower costs and more efficient facilities at Stansted" in return for specific passenger growth targets.

Interestingly, Ryanair has also relaxed its one-bag rule at airports such as Stansted and Manchester to allow a second bag, which MAG says is "ideal for shopping". Clearl,y the airport sees more worth in boosting non-aeronautical revenues at the expense of reducing charges.

And Mott MacDonald's Chalk notes that there were other benefits to the deal for MAG: "It's not just a coincidence that Ryanair's strict one-bag rule was changed soon after the long-term deals were done with MAG. An important facet of the deals done by MAG at Stansted was the ability to show that the airport did not have substantial market power, and the airport was then dropped from those airports that are subject to CAA [UK Civil Aviation Authority] economic regulation.”

But just as airports have found ways to accommodate the low-cost business model, that model appears to be changing.

Both Ryanair and EasyJet have made significant changes to their products in an attempt to appear more customer-orientated and to capture more business traffic. This has also led to these two low-cost giants moving into primary airports such as Amsterdam Schiphol, Athens and Brussels Zaventem. This will create new dynamics in the airline-airport relationship.

Then there are those low-cost carriers, like Norwegian, that have increasingly complex needs at airports from which they are operating long-haul low-cost.

As this evolution continues, airports may find existing approaches to funding are no long fit for purpose and will need to be reconsidered once again.