The planned strategic partnership between Azul and United Airlines will strengthen their respective positions between Brazil and the USA, while creating a more formidable competitive duo in the market.

The carriers will establish a new codeshare and frequent flier partnership on their flights between the two countries, within Brazil and in North America and the Caribbean, they say in a joint release today. Chicago-based United will invest $100 million in Azul for a 5% stake in the company as part of the deal.

Both airlines stand to benefit. Azul gains a major partner in the USA, the most popular destination for Brazilian travellers, and United a much needed partner in Brazil, where it has a major gap in its global partner network following the departure of its partner TAM for the Oneworld Alliance in 2014.

“Brazil is an important market in United's global route network and this partnership with Azul further strengthens our ties to the region," says Jim Compton, chief revenue officer of Chicago-based United, in a statement. "Together we will offer our mutual customers more choice and convenience when traveling to and from destinations across Brazil."

Azul is the third largest airline in Brazil with a 16.8% share of available seat kilometres (ASKs) in June, Innovata FlightMaps Analytics shows. However, it serves more destinations in the country than either its larger competitors Gol or TAM from its hubs at Viracopos-Campinas International and Belo Horizonte Confins International airports.

Together Azul and United offer nearly 20% of the seats in the US-Brazil market in June, Innovata shows. This is still a distant second to the combined American Airlines and TAM codeshare’s 66% share but a solid seven percentage points ahead of Delta Air Lines whose partner Gol does not operate nonstop flights in the market. 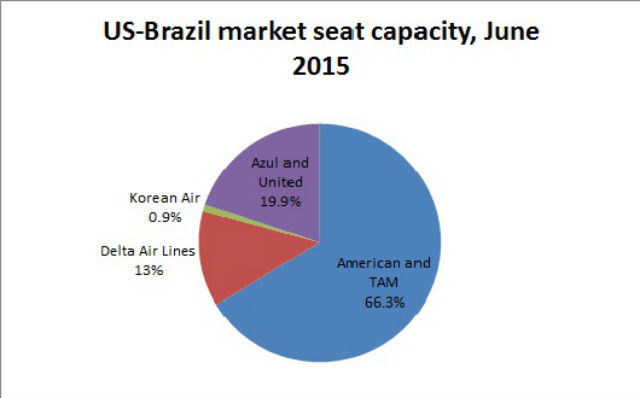 Neither American and TAM nor Azul and United can coordinate schedules or fares in the market as they do not have an immunised joint venture.

United says that it will “explore” the possibility of a joint venture with Azul after US-Brazil open skies is implemented on 1 October.

The Brazilian carrier has plans to launch service to New York by the first quarter of 2016. While it has yet to finalise these plans, it could consider Newark Liberty International airport – a major hub for United – as their New York City gateway.

United has served Brazil since it purchased Pan Am’s assets in the region in 1992. It currently flies to Rio de Janeiro Galeao from Houston Intercontinental and to Sao Paulo Guarulhos from Chicago O’Hare, Houston, Newark and Washington Dulles.

The codeshare is subject to regulatory approval.

United could expand service to Brazil under the new partnership. It holds seven unused US-Brazil frequencies that it recently asked the US Department of Transportation for more time to “examine market opportunities” before utilising. Belo Horizonte and Viracopos are potential destinations which the US carrier could connect to Azul’s vast domestic network.

Chicago-based United has no plans to change its schedule to Brazil currently, it says.

The deal also comes as Azul is widely understood to be considering joining Star Alliance. Mark Schwab, chief executive of the alliance, said on 25 June that they were “in discussions with a second airline in Brazil” following the announcement that Avianca Brazil will join the alliance on 22 July. Azul is the only carrier left in Brazil that is being considered for a global alliance.

United is a founding member of Star.

Azul and United signed an interline agreement in January 2014.

The equity component of the deal is a first for United. The carrier has not taken an equity stake in a foreign carrier since Continental Airlines, which merged with United in 2010, bought a 49% stake in Copa Airlines in 1998. The last of those shares were sold in 2008.

By contrast, Delta Air Lines has used equity stakes in Aeromexico, Gol and most recently Virgin Atlantic Airways to deepen its partnerships with those carriers. It has an immunised joint venture with Virgin Atlantic in the UK-USA market and is seeking one with Aeromexico for the Mexico-USA market.